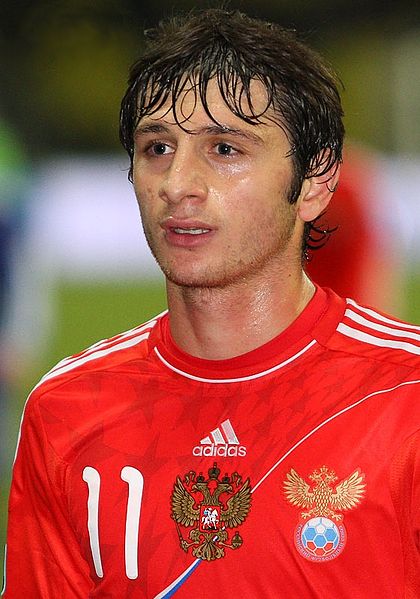 Dzagoev destroyed the Czechs with his pace and power, can he do the same against Poland? (image: soccer.ru via wikimedia)

So the first round of group stages are all done and dusted – now we look forward to our favourite teams heading back to their respective corners to get stitched up, squirted in the face with Gatorade and bombarded with Rocky quotes ready to head straight back out there for round two!

In Group A we saw a frantic start as home crowd favorites Poland exchanged blows with Greece in a surprisingly exciting 1-1 draw. We saw the early elation of the Poles as they took the lead in the 17th minute through striker Robert Lewandowski, who calmly headed past a charging Costas Chalkias, before the Greeks dragged themselves back into the contest.

Substitute Dimitris Salpigidis equalised by jumping on a loose ball in the 51st minute and then totally silenced the home crowd when he was clumsily taken out by Wojciech Szczesny in the penalty area. The Arsenal keeper was given a straight red, but just when Poland seemed to be staring down the barrel replacement goalkeeper Przemyslaw Tyton came to their rescue, keeping Giorgos Karagounis’s shot out to salvage a draw.

In the other game, the Czech Republic floated like butterflies but unfortunately also stung like them, as they were completely dominated by a classy Russian outfit, going down 4-1. Andrei Arsharvin was back to his marauding best, allied by his side-kick Alan Dzagoev. Together they tore the hapless Czechs to pieces and sent a rather intimidating message to the rest of the competition.

But can we top all that tonight? That’s for psychic elephants to predict, but I’m ever hopeful.

So let’s get ready to rumble?

MUST-SEE: The Dutch struggled for goals in their loss to Denmark, but maybe they should have played been playing with a different set-up. Wesley Sneijder normally plays as a midfielder but after seeing this amazing goal that he scored in training, maybe he should be the man to replace misfiring Robin Van Persie up front!

EYEBROW-RAISER: Many pundits are writing off England’s chances of victory this summer, but few have been as harsh as the English Football Association. Despite England only just getting their campaign underway, the FA has already booked a jet to bring the squad back from the championships – on June 20, the very next day after their final group match. Talk about lack of faith!

BALOTELLI WATCH: Mario Balotelli is famous for his off-field incidents, but refreshingly today’s highlight comes from something that happened on the pitch. Unfortunately it wasn’t exactly a positive moment for the Italian, but was still a perfect cocktail of comedy and bemusement for those watching.

With the scores locked at 0-0, Super Mario did brilliantly to dispossess Spanish defender Sergio Ramos in his attacking half and charged towards goal. But with just the keeper to beat, he seemed to forget where he was and slowed down to an almost walking pace, allowing Ramos to recover and make a last ditch tackle that knocked the ball out of play. The replay is classic, with Balotelli clearly having absolutely no idea that Ramos was just behind him.

Then, to complete his misery, he was substituted almost straight afterwards. Champagne comedy again from the number 9.

REASONS TO WATCH: Russia have scored the most goals out of anyone at the Euros so far, and are committed to playing an attacking and attractive brand of football. Wherever they play there should be goals and if there’s anything that makes staying up until 4am worth it, its goals.

REASONS TO NOT WATCH: Citta, the psychic elephant, has been outed as a fraud after she incorrectly predicted Poland would win their first round game (they drew 1-1). If you put money on teams based on her predictions then I wouldn’t want to watch either. Also, small pockets of Russian fans have soured their team’s on-field success with their  poor behavior on a number of occasions.

TONIGHT: Poland will be desperate to get that first win on the board for the home fans, and after dominating for long periods of the game against Greece, they will fancy their chances with a bit more luck. Unfortunately for them, they run into a confident looking Russia, whose championship odds have massively fallen after its dominant win first up.

With the suspended Wojciech Szczesny having to watch from the sidelines, keeping goals out could be a bit of an issue for the Poles and they will be relying heavily on Robert Lewandowski to provide an attacking threat. Based on how both sides went out attacking in their first games, expect to see goals here (3-2).

As for Greece and Czech Republic, it’s harder to know what to expect. On paper the Czechs look stronger individually, but bother these sides are renowned for the defensive tendencies. In qualifying the top scorers for both sides were defenders, leaving the sort of game that neutrals generally avoid with a ten-foot pole. That being said, both sides need wins desperately to confirm qualification to the quarter finals and they aren’t going to get them if they both sit back.

Also throwing a dash of intrigue to the meeting is the history between the two sides. Last time they meet the Greeks stunned the in-form Czechs in the semi finals of Euro 2004, where Greece obviously went the whole way. Most of those players have moved on and retired by now, but the scars from the encounter still burn both sets of fans. Could be a surprising cracker, though I’m going to be extremely pessimistic and say it won’t (0-0).

Tom Midwood is a second-year Bachelor of Sport Journalism student at La Trobe University, and part of upstart’s EURO 2012 team. You can follow him on Twitter: @Tom_Midwood.