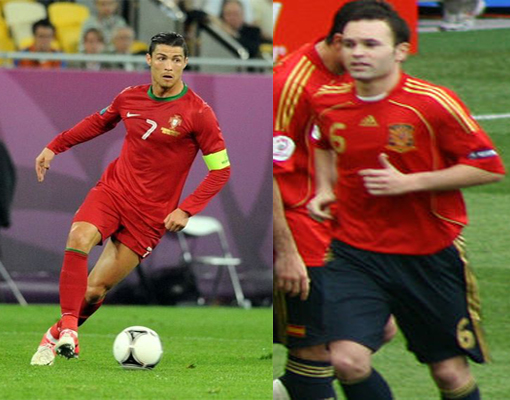 Ronaldo and Iniesta have both starred at EURO 2012, but who will come out on top tonight? (images: Ilja Chochłow & Miguel López via wikimedia)

Portugal began its Euro 2012 season slowly, but did enough to scrape through the group stage before defeating the Czech-Republic last week. Tonight, they face a Spanish team which is yet to reach second gear.

Mario Gomez’s second half header consigned Portugal to a 1-0 defeat in a tight contest against the Germans in their first match.

Then the Portuguese were well below their best against Denmark, escaping with a 3-2 win after being 2-0 up. If it hadn’t been for substitute Silvestre Varela’s late winner, the Portuguese wouldn’t be where they are today – about to enter a Euro semi final against one of the finest teams in the world.

Evidently, it’s the small margins between success and failure in football that make the sport so exasperating.

In the group stage against the Netherlands, for the third consecutive game, Portugal had significantly less possession than their opponents, and they had yet another slow start.

But despite Rafael van der Vaart’s fantastic opener for the Dutch, Cristiano Ronaldo was at his dazzling best down the left flank and scored twice to book a place in the final eight as runners-up behind Germany in group B.

Once again, it was Ronaldo who scored the winner last week against the Czech Republic. It was his 79th minute header that broke the back of the Czechs, who had been resolute in defence, but lacked significant forward impetus up to that point.

For Spain, their road to Donetsk tonight has been a reasonably comfortable affair. This is not to say that they have been awe-inspiring or even awesome. Rather, they have controlled the play in every game to the point where the opposition becomes frustrated and cracks appear. This was the case against Croatia in their final group C encounter, which they won 1-0 thanks to a late Jesus Navas goal, and they followed the same recipe when they beat the French 2-0 in the quarter final on Saturday.

Italy held them 1-1 in their first match of the tournament, and if the ball bounces the right way for the Azzurri and Spanish, they could easily find themselves again squaring off in a Euro final next week.

Fernando Torres has been predominantly out of touch, despite getting a brace against the Republic of Ireland. As a result, Vicente del Bosque has canvassed other options, the most notable being Cesc Fabregas’s inclusion as a ‘false number 9,’ playing a similar role to that of a typical number 9 (i.e. Torres) but with a greater influence than the Chelsea front-man.

Spain has been cruising. They regularly demand at least 60 per cent possession, and look to be well settled in defence, not to mention the lofty calibre of their midfield and Iker Casillas in goal.

We all love football. Similarly, we have all enjoyed the tournament so far. But would we die for the sport? I strongly doubt it.

Yet one Chinese fanatic has reportedly died from exhaustion after watching every single game of the tournament to the end of the Italy vs Republic of Ireland game. Jiang Xiaoshan went eleven nights without sleep such was his love for the world game.

More on the story here.

Mario Balotelli’s successful penalty against England in the quarter final continued his flawless record from the spot in the last three years. He is now nine from nine attempts, yet his evening’s work wasn’t all good, and Man City teammate Joe Hart was just fingertips away from saving Balotelli’s penalty as he dived to his right.

REASONS TO WATCH THIS SEMI-FINAL

If it’s not raining at Wimbledon, it will be soon. The first week of the most prestigious tennis tournament on the calendar invariably dishes up its fair share of wet weather. Yes, the powers that be astonishingly broke with tradition and built a roof on centre court, but honestly, everybody knows that Andy Murray will choke and it’s effectively a three-way battle between Fed, Rafa and the Djok.

So even if it is sunny, the first week is essentially pointless anyway. Much like watching England in a penalty shoot-out – the conclusion is inevitable.

Moreover, with SBS now showing the remaining three games of the tournament live, you can cancel your Setanta payments.

Oh, and Spain versus Portugal is a football purist’s dream. With so much pace, trickery and individual brilliance on show, it truly is a matchup befit of a European Semi-Final.

REASONS TO CHEER FOR AN EARLY PORTUGAL GOAL

If any of Spain’s previous four games are anything to go by, then for the good of the contest it is essential that Portugal score first, preferably early. Thus far, del Bosque’s star-studded team have looked clinical and efficient but in some respects slightly lifeless. They pass the ball around as if it’s a game of keepings off. Back and forth, back and forth, until a small opening arises at which point they pounce.

In order to make this match as good as it can be, the Portuguese need to run the gauntlet a little bit. They need the courage to throw men forward and look to test the Spanish from the start. Should Portugal net an early goal, then Spain’s build up play will be forced to have an element of urgency about it and the contest as a whole will be far more aesthetically pleasing.

It shapes as an all-Iberian Semi-Final – an encounter that is destined to parade all the great qualities of competitive international football.

Portugal are still hurting after their 1-0 loss to Spain in the 2010 World Cup, and their wounds are yet to heal. Tonight, they will get their chance to somewhat redeem themselves.

Ronaldo’s form has been irresistible of late, and he will go head to head with a number of his Real Madrid teammates and Barcelona rivals in what looks to be a mini El-Clasico within a Euro Semi-Final.

He has never scored against La Roja, coming agonisingly close in Portugal’s remarkable 4-0 friendly victory in November 2010 before an off-side Nani got his head on Ronaldo’s already goal-bound chip.

Both Paulo Bento and del Bosque have featured 4-3-3 formations in this tournament, and they are looking likely to do so again tonight. The difference is Spain’s forward three intertwine with the middle three, creating a 4-6-0 formation at times. This will certainly be the case if Fabregas starts and Torres is forced to warm the bench.

Joao Moutinho is the key in midfield for Portugal. His pinpoint passes are vital to their speedy transition from defence to attack. Helder Postiga has been ruled out due to a hamstring injury. His likely replacement will be Hugo Almeida, who is an adequate back-up with 43 international caps to his name.

In contrast, Spain looks to be a settled unit at the moment, playing within themselves and intent on peeking at the right time. Andres Iniesta and Xavi are crucial components for del Bosque. Should both continue their fine form, it’s hard to see Spain going home.

Portugal has enough individual ability to seriously trouble Spain, but whether they are able sustain this for the entirety of the contest is another question all together.

Spain are the favourites, and rightly so.