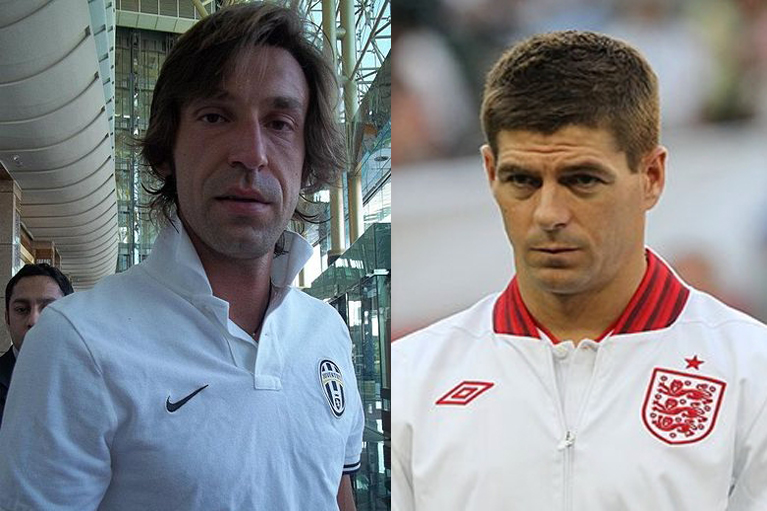 Pirlo vs Gerrard – who will win the midfield battle when Italy takes on England? (images: F1Fans & Stanislav Vedmid via wikimedia)

Catenaccio – or ‘door-bolt’ in English – is the system that relies heavily on a solid defence, which absorbs all the pressure the opponent can throw at it, and then rely on counter-attacks to score past a frustrated opposition. The style was adopted and made famous by Helenio Herrera at Inter Milan in the 1960s, and while changing in its forms throughout the last 60 years, has often remained an essential part of successful Italian football sides – most recently during Italy’s 2006 FIFA World Cup triumph.

Yet when Italy faces England – a country renowned for its direct and attacking style of football – in tonight’s Quarter Final, it is as if the roles have been reversed.

Cesare Prandelli’s side have played some of the most attacking and direct football at EURO 2012, while England – under Roy Hodgson – have been contained, organised and largely defensive.

Prandelli started his group matches with a 3-5-2 formation, with Roma defensive-midfielder Daniele De Rossi in the heart of the back three. The midfield has seen Andrea Pirlo – who is in outstanding form – flanked by two ‘bodyguard’ style midfielders, which allow him to effortlessly stroke passes to the front and wide men with relative ease.

The Italy of EURO 2012 has looked open and positive in its play – much unlike that of its predecessors. Pirlo has happily shown his passing repertoire, knocking countless 50 yard passes and through-balls across the pitch, to help his side pepper the opposing goal.

Italy had a total of 33 attempts at goal during its 2-0 win over the Republic of Ireland, as well as 25 both on and off target in the 1-1 draw with Croatia. The slow, boring tag so often associated (and exhibited) with the Azzurri now seems a thing of the past.

Conversely, England has played an almost ‘Italian-style’ tournament thus far. Hodgson’s men have been successful in winning Group D, yet largely uninspiring. Defensively, England has been solid for the majority of the group phase, with only a few minor blips – such as Nasri’s goal, Mellberg’s two goals, and Marko Devic’s ‘almost goal’.

These few moments aside, England have begun the tournament with slow, but progressive steps. The English haven’t dominated anyone yet, but have done enough to grind out results – which have seen them make the Quarter Finals.

John Terry and Ashley Cole have played well in England’s defence, and are no strangers to the defensive, Italian style of play. Both were defensively outstanding in Chelsea’s Champions League success last season, in which Manager Roberto Di Matteo played an incredibly defensive and compact system – not unlike Hodgson’s.

The Chelsea side that won the Champions League is arguably one of the weakest seen in the Abramovich era, as shown by its sixth-place finish. Yet by the time Di Matteo was installed as interim-manager in place of Andreas Villas Boas, he was clever enough to realise Chelsea’s weaknesses, as well as remaining strengths, and re-forged the side into a solid defensive unit. Chelsea were seen by few as a chance to win the tournament, yet managed to tame the highly talented Napoli, the marauding Barcelona, and ultimately Bayern Munich – in Bavaria – to win the cup.

In a sense, Hodgson has done the same. Well aware that his squad, largely due to the numbers of pre-tournament injuries the squad suffered, is – on paper – nowhere near as strong as the likes of Spain or Germany, or even as strong as England’s 2006 World Cup squad, Hodgson has completely reformed the ‘English’ style of play within the side, and created a team that is un-exciting but successful.

Midfielder Scott Parker said that England can emulate the success of Chelsea, after being written off as ‘no hopers’ at the start of the tournament. With Hodgson’s formula, and a bit of luck, perhaps England can…

MUST SEE: Talksport magazine interview a number of ‘jolly’ fans during the group stage:

EYEBROW RAISER:  Sol Campbell warned England fans to ‘stay away’ from EURO 2012, because of the entrenched racism and violence in Ukraine; saying that they would be likely to ‘come home in a coffin’. Before the England – Ukraine group match, English fans responded to the former England defender by carrying a coffin emblazoned with ‘you’re wrong Campbell’ and ‘we’ll do what we want’ on the sides through Donetsk.

BALOTELLI WATCH: The enigma that is Mario Balotelli continues to create headlines, most recently from within the Italian camp. A frustrated Daniele De Rossi said recently that Balotelli ‘needs to grow up’, while manager Cesare Prandelli admitted that ‘he puzzles us all’ following Balotelli’s near-outburst after scoring against Ireland. England midfielder and Manchester City team-mate James Milner said that England are fully-aware of Balotelli’s potential threat, as well as his potential to explode. ‘There are two Marios,” said Milner. “There is the one who turns up sometimes in training when it is a bit cold and he is not too interested … The other one is when he really wants it and he is a special talent.’

While it is unclear whether or not Prandelli will decide to gamble upon the striker, in the mean time, enjoy Super Mario’s amazing hat.

TONIGHT: The fourth Quarter Final, Italy vs England. Whoever wins will play Germany in the Semi Finals.

Italy has played well thus far at EURO 2012, and will fancy its chances against the Germans, if it can first beat England. Andrea Pirlo is the key man for Italy. His passing, vision, set-pieces and tackling has been outstanding during the group phase, and the 33 year old doesn’t look like slowing down.

Prandelli has a number of selection headaches, the first being who will fill the void left in defence by the injured Giorgio Chiellini, who is out with a thigh injury. Leonardo Bonucci – who featured against Ireland, is the likely replacement.

The Italian Manager – who is likely to continue playing two men up front, also has to choose out of Balotelli, Antonio Cassano and Antonio Di Natale, all three of whom scored during the group stage.

For England, Hodgson will have to choose between the hard-working Danny Welbeck and the aerial threat of Andy Carroll to partner Wayne Rooney. Welbeck combined well with Manchester United team-mates Rooney and Ashley Young, yet Hodgson may want to utilise the threat and form of Carroll to attack Italy’s back three.

While Italy have a world-class playmaker in Pirlo, England’s Captain Steven Gerrard is in comparatively dominating form. Gerrard leads the tournament in assists with three. Gerrard racked up 47 passes against Ukraine (at 91% passing accuracy), swung in eight crosses and won six tackles – before being named man of the match.

Gerrard has been strongly supported by Scott Parker and Joleon Lescott. Parker has happily buzzed about the midfield, blocking shots, winning possession – which has allowed Gerrard to create for the strikers. Lescott is in fantastic form, and after scoring against France, has strongly partnered Terry at the back.

A key part of this battle could come down to the quality of the goalkeepers. England Joe Hart continues to emerge as one of Europe’s top ‘keepers, while Italy’s Captain Gianluigi Buffon remains in the upper echelon of the world’s goalkeepers. Both have played outstandingly in the group sides, and will no doubt be relied upon tonight.

Tonight’s match will be very close – and nowhere near as open as Germany’s 4-2 thumping of Greece. If England can remain composed, and stay switched on defensively for the entire match, then the Three Lions are capable of defeating Italy. On the other hand, if the Italians continue to play their flowing, possession based style; then they stand a strong chance of pulling the English apart.

Few truly expect England to do well at EURO 2012, yet just as Chelsea managed last season, England may well cause another upset. Italy are a much stronger side than that of the 2010 World Cup, but not quite strong enough to win a tournament, yet. England 2 – Italy 1