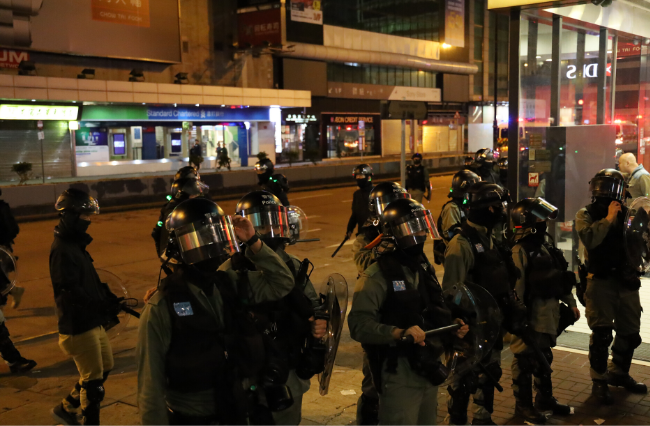 The United States has threatened sanctions over the Chinese government after thousands of protesters have swarmed some of the busiest areas of Hong Kong in response to the proposal of new security laws.

“And if they do … Secretary [of State Mike] Pompeo will likely be unable to certify that Hong Kong maintains a high degree of autonomy, and if that happens there will be sanctions that will be imposed on Hong Kong and China,” he said.

Plans were revealed by Beijing last week that would allow the mainland’s feared security agencies set up operations publicly in Hong Kong for the first time instead of operating on a limited scale.

Many fear this will take away the civil rights that separate Hong Kong from the mainland.

Secretary Pompeo said in an emailed statement that the United States urges Beijing to withdraw its “disastrous proposal.”

In response, protests were made between the Causeway Bay and Wan Chi neighbourhoods of Hong Kong in a pro-democracy movement.

Police arrested 180 people for illegal assembly and four officers and six protesters were hospitalised according to police.

The rally was mostly peaceful but periodic clashes saw Hong Kong police fire rounds of tear gas, pepper spray and a water cannon to attempt to disperse the crowds.

Crowds chanted “Hong Kong independence, only way” and some sang “Glory to Hong Kong,” the unofficial anthem of the protests.

The Hong Kong government had relaxed many of its COVID-19 restrictions but maintained limits on public gatherings which prompted accusations that this was a tactic to prevent protests. Many protesters raised face masks in front of police, saying they were attending a health forum.

Lat year Hong Kong residents protested in their millions against a now-withdrawn bill that would have allowed criminal suspects to be extradited to mainland China.

The movement also included demands for broader democracy amid perceptions that Beijing was tightening its grip on the city.