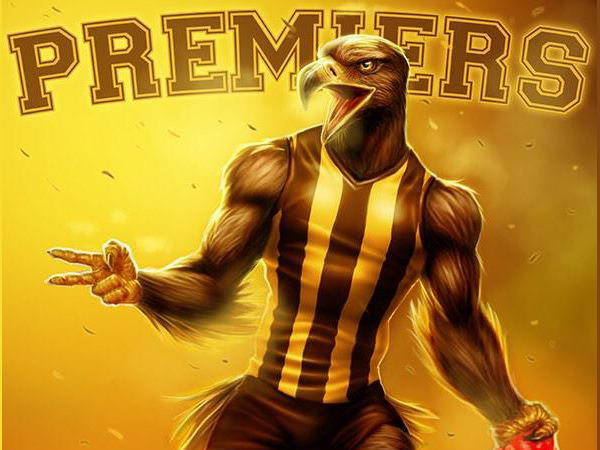 The Grand Final is not a foreign experience to Hawthorn players, but unlike last year, their opponents are not novices.

Fremantle star Hayden Ballantyne capitulated before the continuous drone of 100,000 voices in 2013. The last time Sydney played on the last day in September, they left with premiership medallions.

Possibly without Cyril Rioli and now with Lance Franklin against them, the team that avenged their 2012 grand final loss with glory last year will need something different to go back-to-back.

Adapting has been somewhat of a strength for Hawthorn. The loss of Franklin has amounted to just a one point drop in their average score each week (111, from 112 in 2013).

Darren Parkin says Hawthorn’s ability to play any hand they are dealt has got them to the final match.

“Hawthorn has more answers than anyone else in the competition,” says Parkin. “ It doesn’t mean they win but it means they have more up their sleeve.”

Hawthorn leads the competition averages for handballs, disposals, points and opposition kicks differentials. They only marginally trail Sydney for inside-50s per game and least inside-50s conceded per game.

“The way I’ve seen Hawthorn over the course of the season is that they are the most versatile,” says Parkin.

“They’re the side that can adapt to difficulty and opposition momentum better than anyone else.”

Containing the Sydney forward line that indiscriminately mauled North Melbourne last week has been a focus all season but Parkin says that does not mean Hawthorn are without scoring options of their own.

“Whilst you look at Sydney and that powerful forward line, I think Hawthorn have more options across the ground and through the middle to change things up.”

“Probably their weakness a few years ago was pace and I think they’ve addressed that. They average more goal kickers than any team in the competition. I think it’s about 9.5 a week,” he says.

As for containing Franklin, Kurt Tippett, Adam Goodes and Sam Reid, Parkin suggests the midfield strength will prevent any changes down back.

“I think they’re comfortable with their back seven,” says Parkin. “Hawthorn’s main asset is stopping their opposition getting the ball inside-50.”

Hawthorn’s ability to go third-man-up in contests will decide how effective the Swans forwards can be.

“In defence, Gibson, Stratton and Lake can roll off players onto other players depending on the gaps they need to fill,” Parkin says. “Sydney will try to isolate the contests.”

Unlike Sydney, the Hawks’ selection panel will have more than a few difficult decisions to make tonight. Even if the backline does not change, the illustrious but severely under-done Cyril Rioli may make a return.

Rioli tore his hamstring in round 15 after sitting out rounds 9 to 11 with the same injury. The last player to return from such a break was St Kilda’s Steven Baker in 2010. However, Parkin is not convinced Rioli should be selected, even as a substitute.

“If you play Rioli, which way do you go? The record of underdone players in grand final is really poor. Essendon did it 2001, Brisbane in 2004. It just does not work.”

Last week’s omission was 30-year-old Brad Sewell for Matt Suckling. Suckling had played every game for Hawthorn in 2014 until his ankle injury in round 22.

“I think Suckling plays regardless,” says Parkin. “It’s a question of Sewell or (last week’s substitute) Simpkin. It will probably be hard to bring both Sewell and Rioli back because of who they drop.”

“The most vulnerable would be the sub, in Simpkin. There are not too many others who would be in the gun.”

Parkin says the omission of Sewell last week should not reflect on his chances to play in the decider. Sewell and Ben McEvoy were rested from the VFL grand final on Sunday.

“I would suggest Sewell was dropped for the Port Adelaide game largely because it was Port Adelaide who are such a fast team. Sewell is not blessed with leg speed and Port damage teams with their run.”

“He is a big game player. He’s tough and competitive. He should suit playing against a team like Sydney. I’d play Sewell ahead of Simpkin.”

In Hawthorn’s final selection dilemma, the job to support David Hale is up for grabs. Jonathan Ceglar has been that man for the finals but McEvoy may yet rob him of a spot.

McEvoy has averaged more hit-outs per game than any Hawk and played in the round 18 clash against Sydney when Hale missed. However, his only outings in the brown and gold in the past month has been for VFL-affiliate Box Hill.

“McEvoy has pretty much dominated his past three VFL games, “ says Parkin. “I get the feeling that McEvoy will play.”

Tomorrow, Darren and Luke will look at Sydney’s chances for the flag.

Limited edition print will be available if Hawthorn win.