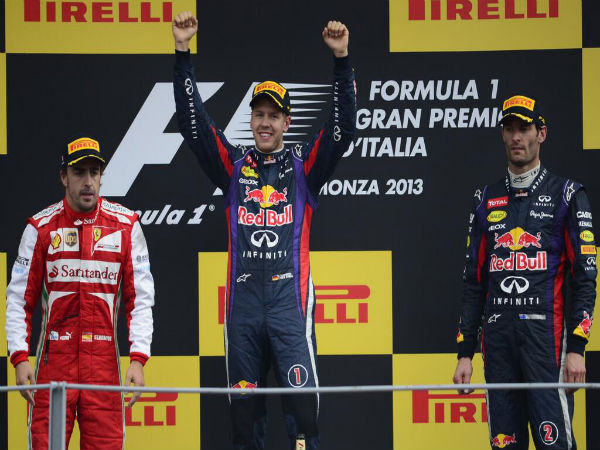 At Red Bull Racing’s unveiling of its new car in February, Sebastian Vettel was asked what his plans were for world domination in 2013.

“World domination? I’m German, but I didn’t say that…and I have no moustache,” joked Vettel, who then raised his little finger in reference to the Dr. Evil character of Austin Powers fame.

It is somewhat ironic then, that the three-time world champion has found himself as real-life villain just a few months later.

Just last weekend, the 26-year-old turned in yet another masterclass performance to win the Italian Grand Prix, claiming his sixth win of the season and putting him well on track for a fourth straight world title.
It was his 32nd win, putting him on as many Grand Prix triumphs as archrival Fernando Alonso. Only Ayrton Senna, Alain Prost and Michael Schumacher have more.

But, instead of being lauded on the podium, Vettel was greeted with a chorus of boo’s from the crowd who packed Monza’s start/finish straight.

Granted, Vettel isn’t the only one who has received a heckling by the parochial pro-Ferrari crowd. Last year, Lewis Hamilton was dealt similar treatment after he denied their golden boy Fernando Alonso a victory in front of the passionate tifosi.

Some would say it’s pure coincidence, but this has become a reoccurring theme for Vettel in recent months.

When his Red Bull coasted to a halt against the pitwall on the exit of Club Corner at the British Grand Prix earlier this year, the roar from the crowd was deafening. As Vettel clambered out of the stricken RB9, the Silverstone faithful cheered and clapped as if it were a Lewis Hamilton or Jenson Button win.

Fast-forward a month to the Belgian Grand Prix, at the legendary Spa-Francorchamps circuit. Vettel stormed to yet another race win, but is jeered on the top step of the podium by the normally respectful Spa crowd.

As talented as the German may be behind the wheel, there is a darker side to Sebastian Vettel that hides behind the smiling face and usual jovial demeanour.

His brilliance is overshadowed by a complete and utter ruthlessness to attain success at all costs. It can be said that Senna, Prost and Schumacher all possessed similar mentalities.

The difference with Vettel seems to be his sense of entitlement. When things don’t go his way, tantrums closely follow.

It isn’t entirely his fault.

Red Bull has backed Vettel since his early teens, providing him with the necessary funding and training that has gotten him to Formula One. That in itself is not the issue.

Vettel was, and still is, Dr. Marko’s little project. The 70-year-old Austrian is an ardent supporter of the German and has constantly stood behind his man, even when he has clearly been in the wrong.

Despite Marko’s lack of F1 experience – he drove 10 races between 1971 and 1972 – his power and influence at Red Bull means that Vettel feels that he can behave however he likes, safe in the knowledge that the motorsport adviser will back him at all times.

The first signs emerged at the Turkish Grand Prix in 2010.

Vettel collided with teammate Mark Webber and effectively took himself out of the race. The majority of onlookers – including commentators Martin Brundle and David Coulthard – agreed that the incident was Vettel’s fault and that he swerved into the Australian.

But not head-honcho Marko.

According to both the Austrian and team principal Christian Horner, Webber failed to give Vettel enough room and caused the accident.

From then on, Vettel has been backed by his team in virtually every situation that has involved himself and his teammate.

Both Marko’s and Horner’s comments following the incident only confirmed, in Vettel’s mind, that he is the golden boy at Red Bull – the chosen one. A belief that is strengthened by the fact that both in qualifying and on race day, he so often has the better of Webber.

But again, it isn’t because of his talent that he is now routinely jeered. It’s his sense of superiority; an arrogance that is hidden behind his relaxed nature off the circuit.

Quite frankly, the Malaysian Grand Prix became the tipping point for Formula One fans sick of Vettel’s antics.

The now infamous Multi-21 incident, where Vettel defied team orders to overtake Webber and claim the win, was an open display of egotism. He tried to justify his actions by saying it was a simple mistake, a miscommunication between team and driver, but he only dug a deeper hole for himself.

Vettel must now come to the realisation that public perception of him has changed. There are reasons why there are jeers on the podium and cheers when he retires from a race.

While he keeps winning, he probably won’t be bothered. That’s why many were hoping Kimi Raikkonen would replace the outgoing Mark Webber and potentially knock the German off his perch.

If Red Bull maintains its dominance in 2014, many will be hoping Webber’s replacement – Australian Daniel Ricciardo – can put a halt to the Vettel juggernaut.