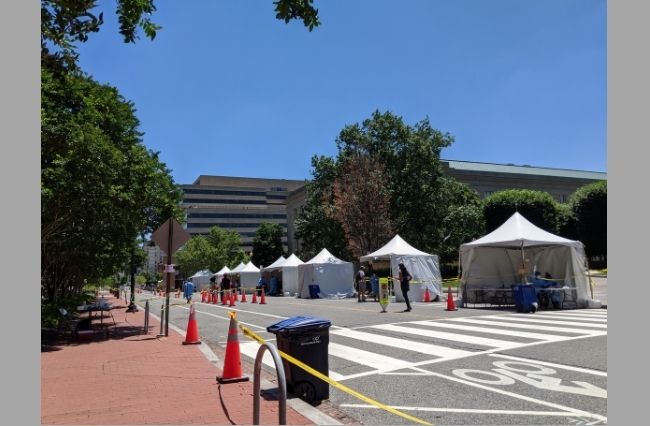 Victoria has recorded seven new COVID-19 cases today, including an unknown case that was linked to a testing site traffic controller.

Yesterday, Health Minister Martin Foley confirmed the man that worked at the Moonee Valley Racecourse site, tested positive after two days of developing symptoms. The testing site was closed for a clean, and staff who were at the site during the man’s shifts throughout Sunday and Monday have been moved into quarantine.

Chief Health Officer Brett Sutton believes that those who used the testing site were unlikely to be exposed, due to the traffic controller infection not being connected to the recent outbreaks.

“I think it’s more about where he’s acquired it from rather than the risk to those coming through because most people would drive through without winding their window down,” he told ABC.

A list of venues in Frankston and Frankston South were added as new exposure sites linked to the man, including supermarkets, a petrol station and a liquor store.

Victorian health authorities have also listed 7-Eleven Yarraville and Altona North’s Woolworths as new exposure sites, both recorded as tier 2. These exposures were not linked to the Moonee Valley case.

Over 42,000 test results were gained in the past 24 hours, however all other cases were linked to Victoria’s recent outbreaks, and were in quarantine during their infectious period.

New South Wales has reported the highest new figure of daily cases in Australia since the start of the pandemic, with 239 cases in the last 24 hours. In response, Premier Gladys Berejiklian has introduced new restrictions in eight new local government areas that requires wearing a face mask, and no travelling more than 5km from home for shopping and to exercise.

As the numbers continue to grow, Prime Minister Scott Morrison has released support packages for businesses in Victoria and NSW in regards to the recent outbreaks and extended lockdowns.

The new Victorian Business Support Package will gain an extra $400 million towards thousands of businesses, with which funding will be split 50/50 between the Commonwealth and the Victorian Government.

The Prime Minister has also continued to work closely together with NSW to support businesses, extending the COVID-19 Business Support Payment.

Eligible entities will now gain payments between $1,500 and $100,00 per week, including non-for-profits and is based on the measures of their payroll. Business thresholds will be increased from $50 million to $250 million.

In an interview with Jim Wilson from 2GB, Morrison states that these economic supports will allow businesses to bounce right back.

Photo: Sunshine at DC’s Judiciary Square free COVID-19 test site by angela n available HERE and used under a Creative Commons Attribution. The image has not been modified.