So far, the Australian public along with the media have deemed the Olympics a bleak campaign.  But come the morning, the country will be looking for a beacon of light as Sally Pearson competes in the 100m hurdles final. 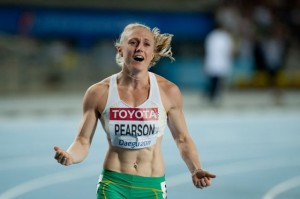 Despite having been defeated once during her build-up to the London Games by the US’s Kellie Wells, Pearson has already been dubbed as a certain gold medalist by the Australian people.

Coming into the event, Pearson has the fastest time out of all the competitors, with a personal best of 12.28 seconds.  She also holds the season’s best time of 12.40.  And so it’s understandable that she’s the favourite to take home the gold medal.

But Australians know too well from these Olympics that being the favourite does not guarantee a gold, and coming in second is all but a sobering reality.

Our hopes in James Magnussen were lost as he touched in one one-hundredth of a second in the men’s 100m freestyle to claim Silver.

Not to mention the men’s 4x100m freestyle relay, that Magnussen was part of, where our boys finished without a medal despite qualifying the fastest in the heats.

These are certainly enough reasons to dash any certainty tags Pearson might have attached to her.

With a clear shortage of gold medals, it would appear from this Olympic campaign that all we can manage is a second-place finish at best.

Like many of our athletes, Pearson has had an up-and-down preparation since she claimed silver in this event four years ago at Beijing.

In 2010, during the Commonwealth games in New Delhi, Pearson was stripped of a gold medal in the 100m sprint after a review of the race showed that she had a false start in her initial attempt to begin the final.

However, wrongdoings of the previous year were surely forgotten in 2011, as Pearson went on to win 15 out of her 16 starts and become the world champion for the 100m hurdles during the World Championships in South Korea.

As a result of such an outstanding year, Pearson was named the world’s female athlete of the year, and in doing so, became the first ever Australian to be privileged with the award, something that in itself deserves a standing ovation.

All of this shows why she is installed as favourite to win gold, and with her preparation almost flawless, we expect it.

But with her growing accolades comes the pressure to perform, and Sally Pearson will be carrying the hopes of the nation as she competes in her favoured event, the 100m hurdles.

Even if we take Australians and our high expectations out of the equation, Pearson will expect herself to deliver on the world stage.

She is an athlete, competitor and a world champion, and crossing the line first is her only option.

To deliver gold is by no means an easy feat and to get to where she is deserves all of Australia’s utmost respect.   And as contradictory as it may seem, Australians will of course still be proud no matter the finish.

We applaud our athletes and recognise them as heroes and role models, which from such a small country deliver world-class performances.

But let’s be honest – we want gold, and Sally will deliver.

The women’s semi-finals for the 100m hurdles begin at 04:15 Wednesday AEST

Joshua Jeans is a final-year Bachelor of Media Studies student at La Trobe University and is upstart’s current sports editor.  You can follow him on Twitter: @jeansjoshua