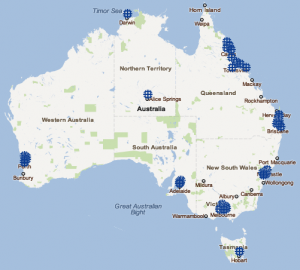 If you’ve been following the Federal Government’s Independent Media Inquiry the past few months, you’ll know that Australia has one of the most concentrated patterns of media ownership in the world.  As a number of submissions to the Inquiry have noted, one company — News Corp — controls 70 per cent the Australia’s print news.

That’s a lot of newspapers and magazines. But what does that 70 per cent of the print media market look like? This map provides the perfect vantage point from which to view News’ dominance of the Australian news media. The map includes News’ publications from the Herald Sun to the Hills Gazette.

And the map isn’t confined just to newspapers. Given that content from other platforms often finds its way into print products through re-purposing content or cross-promotions, book publisher HarperCollins, television production companies such as Shine Australia and Foxtel are also included, as are standalone information sites, such as truelocal.com.au.

Most of the information, including location and circulation and readership information was gathered via NewsSpace. Where possible, we have tried to give the editorial address. Some publications do not list an address, or are run from a metropolitan head office. Many others, such as community newspapers, are run out of the same office.

To see more detail, use the zoom tool or visit the map on Google Maps to view a list of the publications and media properties in a sidebar.