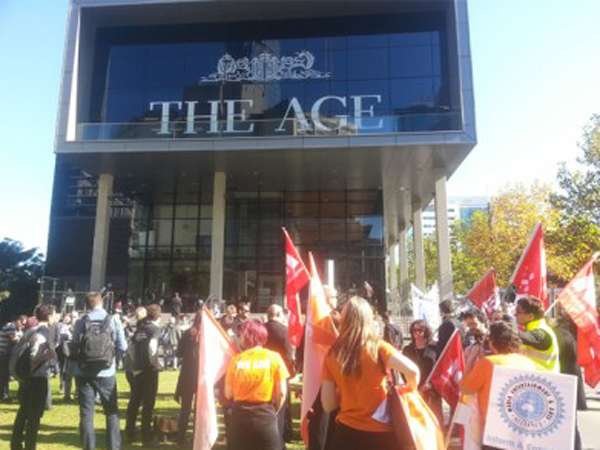 It felt like Groundhog Day on Thursday for many aspiring journalists, as the depressing news broke of further redundancies being made by Fairfax media to its metro mast heads, The Sydney Morning Herald, The Age and The Canberra Times, where around 80 jobs are predicted to be axed from the paper’s photography, sub-editing and reporting departments.

The move, which was delivered via email on Wednesday morning and is expected to save 5-6 million dollars from the media giant’s bottom line, shocked Fairfax workers and led to a 24 hour national walkout in protest over the cuts, leaving only a skeleton of staff to produce Fairfax publications nationally on Thursday.

Speaking from the picket line outside The Age’s headquarters in Melbourne, vice president of the Victorian branch of the Media Entertainment and Art’s Alliance, Ben Butler, tells upstart that the strikes weren’t just about supporting colleagues.

He believes the job cuts are part of a bigger plan by Fairfax to cut out the entire ‘bottom level’ of fulltime reporters from its newspapers and use a model of free lancers and syndicated news reports to fill its pages.

“I believe this represents their ideal model for the future, which is an organisation with no workforce,” he says.

“Everyone is a manager who works at Fairfax. The lowest level of management is a commission editor and there is no reporting staff as such underneath, maybe a few stars here or there, maybe they’re on contract or free lancers as well, but basically removing the entire bottom level of the editorial work force.”

Butler, who is also a business reporter for The Age, points to what’s happened to Fairfax owned papers in New Zealand where staff numbers have been cut, as a sign of what is to come here.

“I think this is an ideologically driven agenda by people within Fairfax, which is being led by Allen Williams who is the head of Australian Publishing Media,” he says.

“He’s just come back from New Zealand where they’ve basically done this. Stripped the guts out of the papers and the websites and everything they own there, and I think he wants to bring this New Zealand austerity model to Australia and change the workforce here by getting rid of it.”

The announcement is the latest in a wave of redundancies to hit Fairfax papers in recent years, as classified advertising, once dubbed ‘rivers of gold’, have dried up in favour of internet revenue.

The biggest cutbacks, announced in 2012, slashed 1900 jobs including three hundred and eighty editorial staff from Fairfax’s newsrooms, which in total amounted to almost a fifth of Fairfax’s workforce. With underlying profits up 12% and Fairfax shares up 57 per cent this year, many had hoped that further cuts by the $2.36 billion company would be behind them.

“Our companies already been through a massive round of redundancies when 150 subs lost their jobs, which has severely diminished our ability to produce a quality product,” says Butler.

“Despite all of this, we in the workforce have committed to doing the best we can under the circumstances and I think we’ve done pretty well, but this again threatens our ability do the right thing by our readers and readers of our websites.”

Butler describes the outsourcing of sub-editing rolls to cheaper external companies like Pagemasters and to Fairfax’s overseas offices in New Zealand as a “sweatshop model” that will damage the future prospects of aspiring journalists.

“If this model of outsourcing continues, there will be no jobs for young journalists in a few years, that’s it, you just won’t have any because you’ll have nothing but freelancers.”

“At the moment I work here full-time. I’m on staff, I have a wage, I have holidays, I have sick pay, superannuation; all of those things. And we’ll lose that, we’ll be kicked out of the building and be sitting at home in our pyjamas writing articles for how many cents we can negotiate per word on our own, with no real newsroom culture and none of those benefits.”

Butler also fears the effect cuts to photographers and reporters will have on the overall culture of The Age.

“One of the things that currently makes this newspaper a great newspaper is the fact it has an active news culture where people question things together and argue with each other about what a story is,” he says.

Fairfax journalists resolved to return to work today to avoid disciplinary action, but with employment opportunities shrinking, Butler says it is imperative for emerging journalists to speak up and tell media companies they value good journalism.

“I think you should let management of this fine organisation know your feelings,” he says.

“Write them a nice polite letter letting them know how you feel, the future of journalism depends on it,” he says.