Every seat was filled at the Athanaeum Theatre last Thursday for Australian Aid’s Australia, Who The Bloody Hell Are We? Comedy Gala. Hosted by comedian Tom Ballard, the night saw a range of comedy acts talking about Australian society, highlighting issues of racism, sexism and equality. 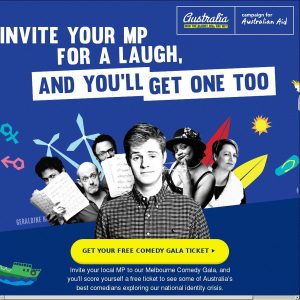 People were invited to ask their local MP to come along to the night.

In an unorthodox approach, the comedy-goers of the night obtained tickets not through purchase, but by inviting their local MP to also attend the evening. Director Tony Milne said he wanted the night to communicate the values of equality and universalism to the audience.

“Regardless of where we are born and our beliefs, we’re all the same at the end of the day and everyone deserves a fair go. We’re at a turning point in history and now is not the time to turn our backs on people living in the poorest parts of the world,” he told upstart.

“Using humour is a great way to shine a light on our common humanity and what unites us rather than what divides us.”

“At the end of the day, a life is a life. So a child born in war-torn Syria or the climate ravaged Pacific should have the same right to life and a healthy future as a child born here in Australia.”

Instead of monetary donations, the Gala encouraged people to use their voice with the hashtag #WhoAreWe on all social media platforms. The hashtag became the top trending hashtag in Australia by the end of the intermission.

@TurnbullMalcolm We'd be a better country if we stopped torturing refugees in horrible indefinite detention, offshore and on. #whoarewe

And therefore they're more likely to understand the importance of @campaignforaid et al. #whoarewe

Each act had free reign over what topics they wanted to discuss, with the marriage equality plebiscite and refugees proving popular.

Australian comedy legends Tripod were among the talented lineup of the evening, performing their song Santa’s Papers, alluding to Australia’s harsh immigration policy.

Simon Hall (Yon from Tripod) hoped that the night would bring the issues back up for discussion in a more positive light. In his eyes, people have a tendency to shut down in the face of fear and scare tactics that some politicians are prone to use, but he believes people are becoming more thoughtful toward others.

“I hope that Australia is going to start to be more community-minded in the world,” he told upstart.

“I sometimes think that because it’s really easy to get elected by making people scared – it’s sort of the easiest way to do politics. I think both of the major parties do that.

“I hope that it’s a trend that abates. I think most people are hospitable people, and once they’re presented with a human face and a story, that it’s a no brainer to be welcoming and to help people, especially people who are coming from really horrible situations.”

For Hall, comedy is a positive way to approach certain messages. He said there are Tripod fans who don’t necessarily agree with the political pieces they do, but because of the uniting love of comedy, they are more willing to listen.

“That’s always the danger, when you do political material, that most people that you’re talking to already agree with you. But hopefully there’s a percentage of people who could go either way, and humours just a good stealth way of making people think about something. Much better than someone getting cross,” he said.

“Seeing someone’s real story, like on Q&A or Australian Story can be really effective. But sometimes you can get into people’s head via a different entrance, via comedy.”