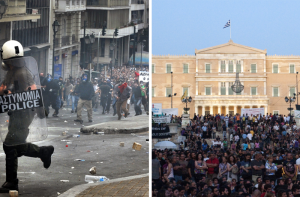 On Tuesday, the Chancellor of Germany Angela Merkel  visited Greece to discuss with the Prime Minister, Antonis Samaras about the future of what is possibly the most reckless economy of the world.

The aftermath was not only some infertile meetings, but also the familiar pictures of angry protestors gathering in the center of Athens, burning German flags and clashing with the police.

‘Those freaking Germans! Who do they think they are? They give us billions and billions of euros, and they ask that we reduce our budget? Who do they think they are?! We should be able to spend all the money we want and they need to keep giving us money! It’s what’s fair!’ This was one of the comments that accompanied Reuters article about the riots in the Greek capital.

Unfortunately, the view of an indolent and ungrateful Greek nation seems to be the prevailing one for people outside Greece.

Greeks know that foreign media reports accusing them of tax evasion, early retirement and a carefree life near the beaches with gyro and ouzo derive from journalists that judge a nation from casual observations.

But why are Greeks angry, and why are they reacting in such a way against those who ‘offer’ them money?

Greece’s extreme reactions against the German Chancellor on Tuesday resulted from a negative, rigid and the sometimes abusive attitude of the German parliament in regards to the Greek financial crisis.

This attitude is what they believe produced a visible deterioration in areas that were regarded as the main problem of the country’s economy: unemployment, investment and competitiveness.

Every memorandum that Greece has signed had to be approved by a German government that was always pushing for more austerity measures and was accusing Greeks of false implementation and crooked practices.

Apart from that, many Greeks are showing open hostility against Germany due to evidence that the country gains billions from the staggering economy of Greece, and the economies of North Europe in general.

According to a revealing report by the National German TV Channel ARD that was broadcast in March, ‘the German economy has gained billions due to the low currency equivalency of the euro that helped  her massive exporting industry’.

Also, the constant braying of the European Union and the Germans about Greece exiting the euro has resulted in an exhausting debate, based on no legal credibility, that has turned many Greeks to see the old draxma as the legitimate exit from their torment.

In addition to that, Greeks resent that the German media, especially the Bild newspaper and the German version of Focus magazine, who constantly publish  provocative and abusive  pieces about Greece. They often declare that the solution for the financial problem would be the selling either of the Parthenon or the Aegean islands.

‘The immoral political propaganda against us and Bild’s callings about welcoming Mercel in Greece as the Savior prove how ignorant about reality [the German] media are,’ a young protestor, Giannis Drimoutsos, said yesterday.

The political coalition of Nea Dimokratia, PASOK and Dimokratiki Aristera seem not to be convinced about their ability to solve the Greek problem.

According to new exit polls, Nea Dimokratia may still be the predominant party that could form the government, but there is great disappointment about the coalition she formed.

Also, the numerous financial scandals that have come to light during recent years, and the impunity of those who gained money through misdeeds, fill Greek citizens with feelings of injustice and turn them to extreme solutions.

In the end, anger may not be justifiable for many under the difficult times that Greece has to face. On the other hand, Greeks seem may have encountered too much and haven’t seen a solution yet.

If you felt ridiculed, aggrieved and that your word didn’t matter anymore, would you regard violence as an alternative? Perhaps so.