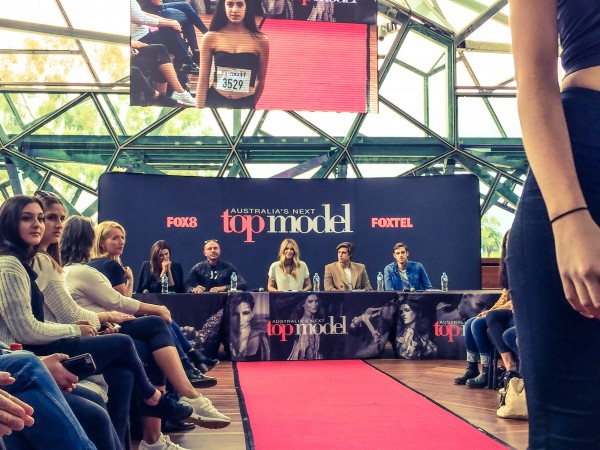 Over 70 young women auditioned to be a part of Australia’s Next Top Model (ANTM) today at Federation Square in Melbourne.

11 of them made it through to the next round of the competition.

Out of the show’s nine seasons, five of the winners have been from Melbourne, including cycle seven’s winner Montana Cox, and last season’s winner Brittany Beattie.

The Stenmark twins, Zac and Jordan, tell upstart that the girls from the world’s most liveable city have a head start in the auditions.

“It’s got a real style and class to it. Maybe that’s what gives them an advantage for ANTM.”

Zac says the show has exposed a lot of Australian talent.

“We’re excited to be a part of growing and nurturing the talent,” he says.

The Stenmark brothers are world-famous for their structured jaws and athletic good looks.

They gave up potential AFL careers after being rookie listed with Greater Western Sydney to catch a modelling opportunity that was serendipitously thrown their way.

The two – distinguished only by their current hairstyles and facial hair – have launched a fashion, lifestyle and wellbeing website that follows their lives.

They tell upstart that designing a fashion label is potentially “on the cards”.

“We kind of want to do a bit of everything. Today you can’t just be one thing, you have to be multi-faceted,” Zac says.

“It’s not so much having a list of things [to achieve]. It’s more about being open to every opportunity.”

Excited about their new opportunities in the industry, Melbourne models, Boston McCathrion and Valentina Attard, are two girls through to the next stage of the competition.

McCathrion used a full-length mirror at the end of her hallway as a makeshift catwalk to practice for today’s audition.

Attard, 17, won her first modelling competition when she was eight-years-old, and tells upstart she felt like Britney Spears.

ANTM is based on the American version of the show, America’s Next Top Model, which was created in 2003 by Tyra Banks. It has since been adapted in 120 countries, and has produced more than 180 seasons.

For ten weeks, the top 12 girls will be challenged in photo shoots and runway shows, where they will be critiqued by Jennifer Hawkins, Alex Perry and a guest judge.

The contestants will wear worldwide brands, while being mentored by Cheyenne Tozzi and the Stenmark twins.

Dider Cohen mentored the girls in season nine. The Stenmark twins admit they have large shoes to fill, literally.

“We’re so privileged to be on the show. [Cohen] has set a mark and we just hope we can reach that, too,” Zac says.

Jordan says one of the best parts of the show is watching the girls develop.

“I guess that’s what’s so great about being the mentors, being someone to talk to, help them grow and for them to feel as though we’re in their corner.”

Zac says they will treat every girl differently, as everyone responds differently to particular situations.

ANTM tragically lost one of its judges, Charlotte Dawson, in early 2014.

The show will provide the girls with the right tools to walk any runway in Melbourne or Milan.

The prize pack will also help them on this journey. The winner will receive a 12-month contract with the world’s best international modelling agency, IMG Models, an editorial in Elle Australia, a $20,000 trip to New York for New York Fashion Week, and a Mazda 2 Genki.

“Take every opportunity as it comes, because otherwise, something might fly by and you’d wish you’d seen where it lead you,” Zac says.

The Melbourne auditions continue tomorrow at Chadstone Shopping Centre between 10:30am and 2:30pm. You can register here.

Otherwise, you can watch the series soon on Fox8.