The artwork of many Aboriginal and Torres Strait Islander artists were showcased at the awards ceremony. 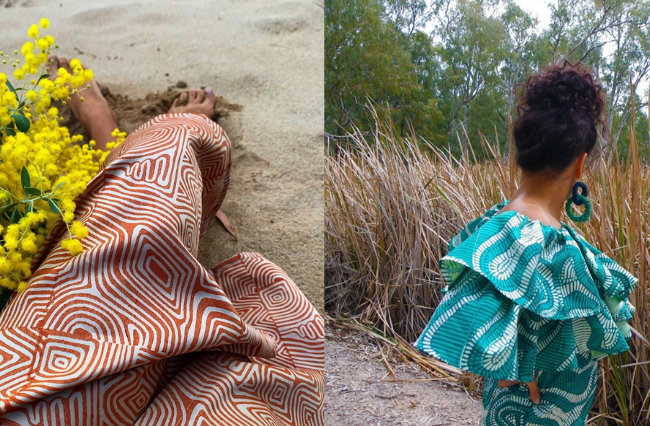 From country to couture, enriched in culture and creative collaboration, Australia’s first National Indigenous Fashion Awards (NIFAs) was held this week, with six artists from across the country taking the top prizes.

NIFAs creative director Nina Fitzgerald said the awards are produced by the Darwin Aboriginal Art Fair (DAAFF) where exceptional works of Indigenous artists are recognised for creations in the fashion market.

In its first year the event showcased collections and designs from Australia’s leading First Nations’ designers and artists with 33 fashion creatives nominated across eight categories.

Julie Shaw, a Yuwaalaraay woman from NSW, won the Fashion Design Award for her luxury resort line Maara. She has been offered a 12-month internship with Country Road saying it could be her break into the industry and that more Australian companies need to make an effort to increase workplace diversity.

“It can be hard getting a start because people want to see a developed portfolio or they want to see your experience, where you’ve worked before.”

“So more pathways into business and into design rooms of large fashion companies would help,” she told ABC News.

Shaw’s fashion label Maara Collective was named in the Yuwaalaraay and Gamilaraay language group, Maara meaning hands. The fashion label was named to honour the “many hands” involved in the creative process of bringing the collection to life.

Shaw says she has found inspiration in her community for her designs and when announced as the winner of the Fashion Design Award of NIFAs 2020, she told the audience that it was a real honour to be recognised among her peers, Indigenous artists, designers, makers and creators.

Among the other creative artists, Peggy Griffiths from WA won the Cultural Adornment and Wearable Art Award with her pieces defining art and expressing culture.

Griffiths’ craft abilities were inherited from her mother Dinah, in a little tin shed in Kununurra, in WA which drew inspiration from the town’s red dirt, grey boab trees and aqua watering holes.

Griffiths’ winning piece The Legacy Dress features layers of her own hand-painted linen and canvas depicting the jilinybeng (bush cucumber) with other layers made by Griffiths’ granddaughters.

“The Legacy Dress has brought young artists together through a form of art they enjoy- fashion.”

“Working with young artists can be a tool to pass [on] knowledge and history through art and fashion. This dress has been a tool to encourage them to connect to their country and culture,” she told Marie Claire.

The ceremony was an opportunity that boasted rich Indigenous culture and community ties recognising and celebrating the innovation, diversity and ethical practices of Aboriginal and Torres Strait Islander artists and fashion designers.

Nina Fitzgerald of NIFAs said the Indigenous fashion designs have much to offer to the Australian market, drawing histories that connect the artists to the land.

The awards have given many artists and designers the chance to showcase artwork that links people to Australia’s oldest living culture and across thousand of years to the land, sea, sky and ancestors. The NIFAs is sustaining cultural identity across its generations.

The six winners of the NIFAs across six categories are:

Peggy Griffiths for the Cultural Adornment and Wearable Art Award

Ninti One for the Environmental and Social Contribution Award

The cover photo is provided courtesy of designer Lillardia Briggs-Houston, from her label NgarruMiimi. She was nominated for the The Cultural Adornment and Wearable Art Award and The Textile Design Award. The dress on the right was made in tribute to her Wiradjuri grandmother. See more of NgarruMiimi on Instagram