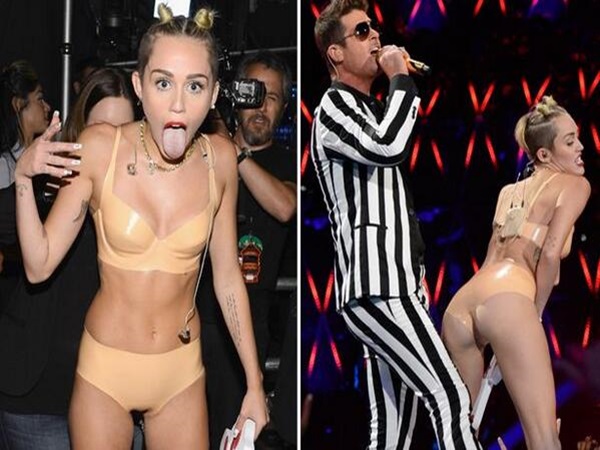 Miley Cyrus’s MTV VMA performance has dominated headlines all over the world and continues to be the talking point across all social media platforms. It even took the place of the Syrian chemical bomb attack on the home page of CNN.com — the self proclaimed leaders in world news.

If you’re lucky enough to have been living on another planet, or you wish to save yourself from being personally outraged by Miley Cyrus and her foam finger, check out this nifty G-rated gif which sums up what all the fuss was about.

While a vast majority of the Twitterverse condemned Miley’s performance as being sexually explicit, borderline pornographic and grossly inappropriate, there was an awful lot of attention paid to the singer’s latex-clad behind.

There have been Facebook groups, memes, tweets, hash tags, and internet pages dedicated to shaming Cyrus and comparing her arse with chicken bones, apples, pancakes and flat, soggy bread.

The overwhelming consensus on Twitter was that Miley’s 20-year-old ass was saggy, untoned, lacking nourishment and small. Apparently her arse is so small it needed the hashtag #mileyasssmallerthan so people could easily compare and discuss the state of it.

The people I’m referring to are women. A large group of faceless women trying to force a young woman to be ashamed and embarrassed about her arse – and her provocative and sexually degrading actions throughout the performance – but really, more importantly, her arse.

Note to #Mileyass please hide me I am so small I make your iq look big. If ur gonna put it out there have sumthin to show.

I’m going to be hitting the squats hardcore so I don’t get a #MileyAss…. that shits nasty. pic.twitter.com/3sWUIDnCJw — Kitty Stoner (@KittyStoner) August 26, 2013

I must have missed the ‘small bums are undesirable and unattractive’ memo that was sent out. Kylie Minogue must have missed it too. Actually, nobody received that friendly reminder because it never existed.

What the latest Miley media saga really highlights is a flaw in society, in women, and in their underlying need to hate each other.

It seems some women in the modern mediated world have a predisposition to judge, discriminate and bully their own kind for reasons based largely on appearance.

In 2012, feminist Germaine Greer gave then Prime Minister Julia Gillard a serve, suggesting she “get rid of those bloody jackets” and come to terms with the fact she has a “big arse”.

Rebecca Sparrow, deputy editor of Mammamia, responded to the remark: “That one comment, that one cheap shot, that one moment when Greer decided that it was okay to criticise a woman based on her size… essentially gave everyone permission to bring ‘arse size’ back into the conversation.”

Julia Gillard’s appearance was not the reason she got the job as Prime Minister, nor was it the reason she lost it. It was, however, a daily talking point in the media and a distraction from the discussion of serious policy issues.

Comments like these don’t belong in an intelligent public conversation. They are a symptom of insecurity and present a sad reflection on the state of the sisterhood in 2013.

Some women will never stop talking smack about other women on social media. They won’t stop judging and envying women they think are better than them.

Luckily, out in the real world, hope is not lost. In a toilet paper-free ladies room yesterday, a beautiful blonde woman came to my rescue. As she handed me a nappy wipe I said, “Thank you so much.”

“No problem! What are girls for”, she said.

That’s the sisterhood and I’m glad it’s not dead yet.

#mileyvma Does anyone else thing she looks like a goat? pic.twitter.com/B2Cloo1VYc