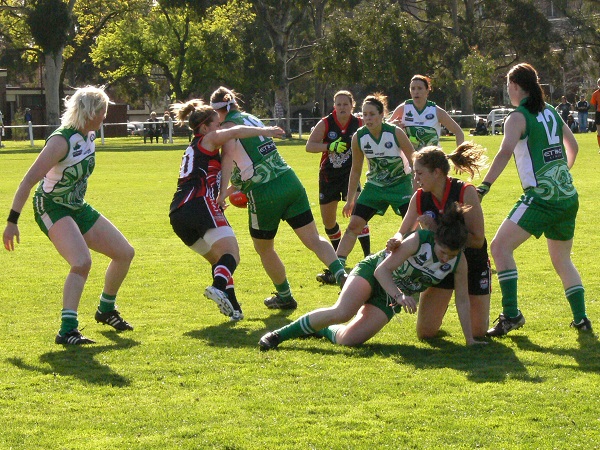 Ten exhibition matches to be broadcast, the possibility of an eight team competition next year and the prospect of a father-daughter rule are all progressions that are bringing women’s footy into the light of day.

With the rise of women in prominent positions in sport, the women’s AFL competition is receiving wide spread, well-deserved attention.

Last Sunday saw the first exhibition match between Melbourne and the Western Bulldogs broadcast thanks to Crocmedia.

Playing in gusty conditions in Craigieburn, it was the Bulldogs that secured their maiden win over the Demons.

Melbourne captain Daisy Pearce was brilliant with 33 possessions, however it wasn’t enough to get her team over the line against a more well-rounded Bulldogs outfit.

“Daisy is an absolute star, she is such a professional and brings that to every game”, women’s sport broadcaster Anna Harrington tells upstart.

Harrington, who is also Social Media and Marketing Coordinator at the Melbourne Football Club, says that having all ten exhibition matches broadcast this year is significant in ensuring that the maiden women’s draw in 2017 is well received.

“It’s hugely important for women’s sport to be broadcast. As you could see with the Matildas game the other night and the AFL women’s match last year, the importance of broadcasting and television of games means that the game is exposed to a wider audience”, Harrington explains.

“If a quality display of football is put on, more people will appreciate it.”

Harrington suggests that the more people view and consume women’s football, the better the response will be.

“You get a lot of people, with women’s sports, have their say when they haven’t watched it”, she says.

“The more investment you put in to ensuring the games are broadcast, the more it pays off.”

The Melbourne Football Club has been at the forefront of women’s football and continues to push for the professional AFL women’s competition.

“We were the team that actively pushed to have a women’s competition”, Harrington said.

Eight women’s team united with AFL clubs may form the new women’s national competition in 2017, most likely to be played in February and March.

AFL CEO Gillon McLachlan told The Age that a father-daughter concept had crossed his mind when looking into establishing the league’s rules, similar to the AFL’s father-son rule.

“For me instinctively I’d say why not father-daughter, why is it any different? Obviously all these things will go to the commission but I’m sure it’s something we will look at”, he stated.

It has been suggested that nothing will be overlooked when bringing the competition together next year, including the possibility of a nine-point super goal – a concept that has been in place since the 2003 AFL pre-season.

Regardless of how the competition looks next year, the exhibition matches will be an honest preview of how the inaugural women’s national competition will shape up.

The SANFL All Stars will compete in the next women’s exhibition match at the Adelaide Oval on Saturday April 2.

Vivienne Duck is a third year Bachelor of Journalism (sport) student and the culture and lifestyle editor with upstart. You can follow her on twitter @VivienneDuck