Does professional wrestling fall in the sporting or entertainment industry, or is it a combination of both? 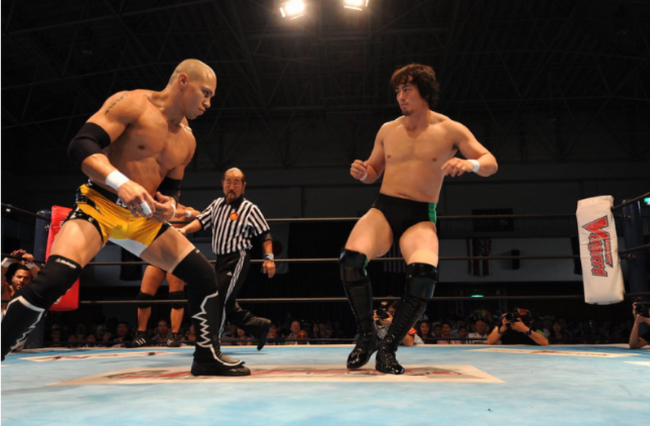 The world of professional wrestling is unlike most sports. There are powerslams and pinfalls, good guys and bad guys and authority figures who assert their power onto those below them. For the most part it all seemed kind of real. Until the rise of the internet.

Kayfabe, the term used to describe the illusion that events in pro wrestling were real, was maintained for a long time. However, the advancement of the internet has allowed more people to truly see wrestling as a staged competition.

Pro wrestling is often compared to sport because of its suggested competitive nature and the athleticism required by wrestlers. However, the pre-determined result challenges the notion of whether it could be a sport.

Sports scientist and PhD student at Deakin University Brad Morris says sport has a variety of definitions. There are times where wrestling could be classified as a sport, but simultaneously may also not fit the criteria.

“In a less structured definition of sport such as ‘physical activity engaged in for pleasure’, professional wrestling would qualify as a sport,” Morris told upstart.

“However, when a more structured definition is used, one that includes the element of competition, then professional wrestling would not qualify as a sport due to the scripted [or known] outcomes.”

Wrestling requires athleticism and physicality that only an athlete could possess. But does that make a wrestler an athlete?

Morris says pro wrestlers compare to other athletes because of the skills required to compete.

“The athleticism possessed by most professional wrestlers is very evident in the extremely physical and highly skilled manoeuvres completed during a wrestling match,” he said.

“Many of the top-line professional wrestlers have excelled at other sports including wrestling at the Olympics, competing and holding titles in the UFC, or were professional or college American football athletes.”

Many pro wrestlers, like Brock Lesnar, have made the switch to mixed martial arts (and sometimes back), while others have gone the other way and have become wrestlers, with the likes of Ronda Rousey going from UFC to WWE.

While wrestling can compare to sport because it fits the physical activity aspect, the debate that it isn’t continues because of its known outcome and lack of competition.

“It is not your traditional sport like having two teams or two different individuals playing against each other fighting for silverware. But it is a sport because it requires a lot of training and fitness to last in the industry,” Dinh told upstart.

While wrestling does involve championship titles, critics of the industry believe these to be useless and not earned because a wrestler is chosen to win a title. This is not always the case. Wrestlers compete with one another to get noticed by a bigger company, like it is with wrestling in Australia.

Dinh says there are many differences between training to be a wrestler and training in other sports.

“The training in wrestling is all cardio-based because you will be moving around the ring all the time and constantly being on your toes,” he said.

“There [is also] character training and promo training because in wrestling it doesn’t matter how good of a wrestler you are, it is also how good you portray your wrestling persona.”

Dinh points toward maintaining ones character as a difficult aspect of wrestling. This is something that isn’t seen in other sports, but in acting instead. However this is extremely difficult in wrestling because most of the time, wrestlers must stay in character even outside of the wrestling world.

“What is hard in wrestling is trying to stay undercover and protecting your wrestling persona,” Dinh said.

“The more you maintain [and show] your wrestling persona to the rest of the world, the more matches you will be wrestling and maybe you will get the chance to wrestle for other wrestling companies abroad.”

Sports entertainment is a term thrown around to describe pro wrestling, however a number of wrestlers say this refers to companies like WWE, where entertainment is the focus. However in places like the independent scene and New Japan Pro Wrestling (NJPW), wrestling is seen as a sport and is treated as competition.

“I think it captures what professional wrestling is, a mix of athletic and skilful actions drawn from a sporting background, combined with a scripted outcome drawing from entertainment or performance arts,” he said.

“Whether or not pro wrestling should be covered in the sports or entertainment section harks back to an earlier question. Is professional wrestling a sport? That depends on what definition of sport is used, and the answer is very much in the eye of the beholder.”

Photo: Camp Zama Slam Fest VI by U.S. Army Garrison Japan available HERE and used under a Creative Commons Attribution. The image has not been modified.