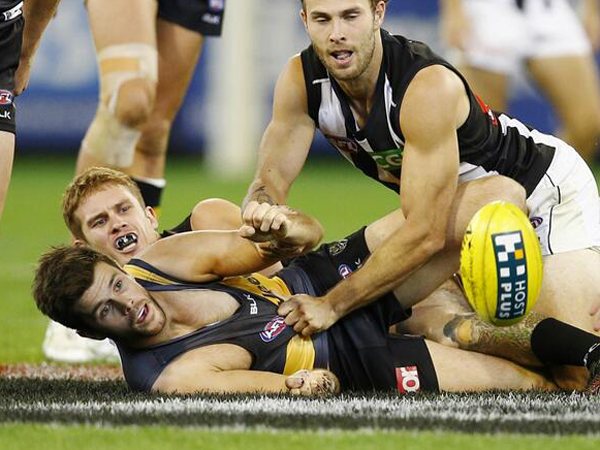 Richmond’s shaky start to the 2014 season has no doubt been clouded by the crisis at Carlton, who coincidently remain the only side the Tigers have beaten after four games.

Sitting just three spots above the Blues at 14th on the ladder, Richmond has just as many questions lingering over their poor start to the season.

Many touted the Tigers to crack into the top four this year after making the finals for the first time since 2001 last season. However their three losses to start 2014 looks ominous.

A team of their calibre should not lose to developing teams in Gold Coast and Western Bulldogs. And they do not cop a hiding against a middle-of-the-road team in Collingwood on the big stage on Friday night football.

Richmond was never in it against Collingwood. They looked slow, lacked confidence and no one could spark the team.

Dustin Martin had enough of it, yet failed to provide his trademark carry, run and excellent kicking skills, going at just 48 per cent disposal efficiency. Brandon Ellis showed no sign of the steps taken in the last season to be a top-line midfielder for the Tigers. And captain Trent Cotchin was tagged completely out of the game by Brent Macaffer, touching the ball just 14 times and going at an equal team low of 46 per cent disposal efficiency.

So where are the Tigers of 2013? It’s the backbone of their success from last season – their midfield – that has put them in hot water.

Their B-grade midfielders in Ellis, Reece Conca and Shaun Grigg have not been the players they were last year. Their performances last season were key in taking the pressure of A-graders in Cotchin, Brett Deledio and Martin to take the game on.

All three – Ellis, Conca and Grigg – promised to all take their game up a level in 2014, but have all had ordinary starts to the season. This has put added emphasis on their skipper, Cotchin, who is getting tagged out of games.

Martin, meanwhile, continues to tease supporters with his inconsistent football. All the while Deledio can’t even get on the park with a re-occurring achilles tendon injury.

Finally, it’s Jack Riewoldt whose confidence is arguably the most shot. Put simply, he is a true full-forward who is being played out of position.

Riewoldt is a confidence player and most valuable to the team when he is played deep in the forward line one-on-one. His break out year of 2010, where he kicked 78 goals and took 54 contested marks, was played out of the goal square; he dominated their forward line. Yet last year he kicked 20 fewer goals and took 23 fewer marks playing up the ground.

The stats don’t lie. It’s a quick fix to get Jack back in the goal square.

A quick turn-around lies ahead in the form of Easter Thursday football for the Tigers, who face Brisbane at the Gabba. It’s also a chance to turn their 2014 record into a 2-3 start, which will read much better than a miserable 1-3 after Friday night’s performance.

But it is the coming weeks that will define Richmond’s season. Following Thursday night’s game, they face Hawthorn, then Geelong before heading into the bye. At least one win against those two teams is a must to play finals footy deep into September.

The significance of a win Thursday night – and big win at that – is just the stepping stone Richmond needs to catapult themselves into the following two matches.

Potentially it’s all between the ears for the Tigers. We know they have the cattle on the park to contend and a confidence boosting performance against the Lions, and possibly the return of Brett Deledio in the coming weeks, could see them turn their season around and head into the bye all square at 3-3.