Participants begin workshops this week to prepare for Youth Parliament. 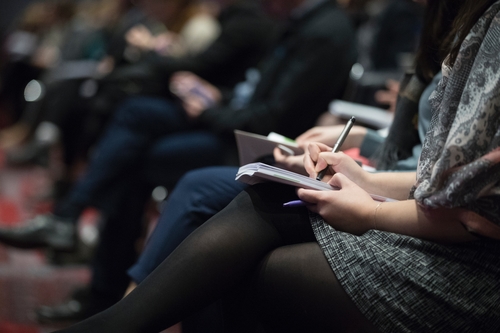 In an era where social media is at its peak, and young media goers are pushing to get their foot in the door, the YMCA Youth Press Gallery is the perfect way for young individuals to showcase their talent.

The Youth Press Gallery is a program derived from the YMCA Victorian Youth Parliament, which provides an opportunity for 16-to-25-year-olds who are passionate about young people and their voice.

Program Director and ex-participant, Hannah Andrews, says the program is a great opportunity for young people who are studying or have an interest in political journalism, photography, film or social media.

“They can bring their passion and skills into the press gallery which reports on youth parliament,” she told upstart.

With applicants flooding in, Andrews says the selection process is critical in selecting the right people for the job.

“Obviously experience is great, but more of what I’m looking for is people who are passionate about young people and the role they can have in politics,” she said.

There are 20 teams who develop a bill, which they debate in Victorian parliament in July. If the bill is successful and passes, it gets handed to the relevant minister, giving the government insight into the issues faced by young Victorians.

After 31-years, 20 bills have gone from Youth Parliament to form actual legislation and law in Victoria.

“This shows the program has a real impact beyond the program itself, its changed the way that society works,” Andrews said.

“I see the press gallery as a way for young people to be at the forefront of reporting on issues that young people care about.”

Since participating at the Youth Gallery program, Andrews says that it has really grown and sustained.

She noted a shift towards social media in the journalism and media industry as a whole.

“This year as the Program Director, I’d like to have a well-rounded focus, not just looking a print journalism, but how to create video content or share news via social media,” Andrews said.

“Lots of different things I think would be valuable to the program.”

It is important to have a wide range of journalists for the program, from print to radio to TV, and even those who work dominantly in social media.

“That’s something that’s really cool about the program,” Andrews said.

“There’s such a mix of young people, young people from Melbourne, from rural Victoria, and this year there’s a team who are all hearing impaired.”

The preparation for parliament is conducted in the workshops prior, with the purpose to introduce the participants to real-life media situations.

“It’s all about up-skilling the journalists,” Andrews said.

“Hearing stories from other journalists about how they got into the industry and what their tips are, interview skills, how to pitch a story to a newspaper, how to get the perfect photo and sending images, lots of hands-on skills.”

During the three sitting days in July, it’s all about utilising those skills. The participants will sit in parliament, capture pictures and speak to radio station and newspapers.

Andrews said the program has extended beyond aspiring journalists, with high profile media also wanting to be involved.

“I’ve had an amazing willingness from a number of high profile journalists who have done really incredible work who want to be involved in the program,” she said.

She says from her experience she learnt a lot of new skills that university didn’t teach her; practicality and what journalism looks like in real life.

Past participants have had their articles professionally published on platforms such as ABC Online, the Bendigo Advertiser and the Wangaratta Chronicle.

Kergan Angel, who took part the program last year, says that the experience taught him to take every chance as an active learning opportunity.

As a 19-year-old who had never studied journalism, he was looking for an opportunity to expand his written portfolio.

His main role was to conduct interviews, produce articles and upload them to YMCA website.

“The most beneficial part was getting the opportunity to learn from them (journalists) and hear about their career paths and how accessible the media industry is with perseverance, grit and creativity,” Angel said.

“They approached juvenile detention in a really constructive, rehabilitation-focussed and compassionate way and really admired the power of positive role-models for all young people,” he said.

“I’ve been really inspired to channel what I gained from the program towards empowering the young people.”

Angel is now working in the communications portfolio for YMCA Victoria’s Youth Parliament, assisting participants to gain their own media and work for the program.

In an industry that is becoming more difficult to break into, the Youth Press Gallery provides the perfect pathway for those looking for their start, as Angel shows.

This year’s Youth Press Gallery participants will use their skills in Youth Parliament in the first week of July at Parliament House.

Paige Voss is a second year Bachelor of Media and Communications (Public Relations) student at La Trobe University. You can follow her on Twitter @PaigeVoss98