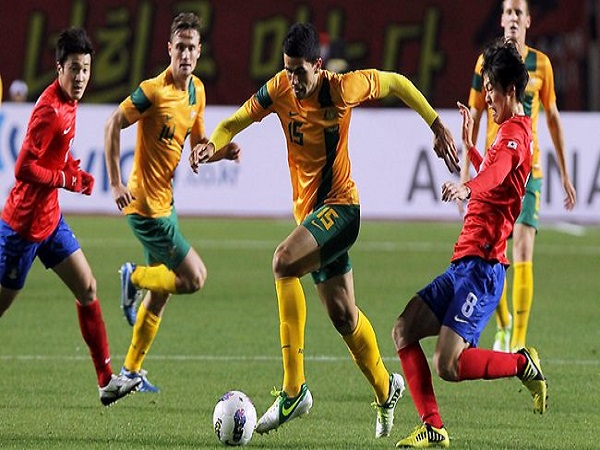 Playing away from home in arguably hostile circumstances, their win against the 158th ranked side didn’t come easy.

The match, that ended 3-0, appeared to start positively for the Socceroos, with Matthew Spiranovic rising high to head an Aaron Mooy corner, which clipped the crossbar just after the quarter-hour mark.

The Socceroos again flirted with an opening goal just before the half-hour mark.

After a goal mouth scramble, Mathew Leckie found an inch of space from a Mooy pass to shoot from just outside the box, only to see his effort cleared off the line by a desperate Tajikistan defender.

Tajikistan had their fair share of chances in the first half, although the game was still locked at 0-0 after 45 minutes played.

Australia once again hit the woodwork courtesy of a sweetly struck Mooy free kick which left the Tajikistan keeper scrambling at the 50 minute mark.

Mooy’s set pieces continued to cause headaches for the opposition, when former Melbourne Victory player, Mark Milligan, poked home his fourth goal for the Socceroos, from a Mooy corner.

Australia seemed to find their confidence and it showed at the 72nd minute.

Nathan Burns threaded a ball to Ryan McGowan, who drove in a low cross from close range, after an overlapping run which found the boot of Socceroos talisman, Tim Cahill.

The team captain sealed the three points on the 90 minute mark with a trademark header, effectively killing off the spirited Tajikistan.

Cahill scored a brace in this game but he won’t be around forever. By the time the 2018 World Cup rolls around, he’ll be 38-years-old. This is hardly an ideal age for a nation’s star player.

Head coach, Ange Postecoglou, has an excellent track record at developing talented youth. He is the perfect man to groom the three key players, Mat Ryan, Robbie Kruse and Tom Rogic, in the lead up to Russia.

Indeed, the heroic exploits of Mark Schwarzer will be forever etched in the minds of Socceroos fans.

After the big man retired from international football in 2013, the national team was left with big gloves to fill.

Ryan has climbed to the lofty height of the Spanish first division, where he can expect to come up against bombardment from the likes of Ronaldo and Messi, which is perfect preparation for any budding World Cup shot stopper.

“Playing against class opposition in the Champions League will further improve Ryan’s game,” Kerr says. “He should be the Socceroos’ first choice keeper in 2018.”

Another former Central Coast Mariner, Rogic, seems to have an innate grace whenever the ball is at his feet, easing past defenders in his distinctively lithe style.

“Rogic is one of those players who seemed a class above the rest when playing in the A-League,” Kerr says.

Having missed the 2014 World Cup through injury, Rogic will be itching to deliver on his obvious potential.

“With experience and a stronger body, he could be a mainstay for the Socceroos leading up to the 2018 World Cup.”

“Kruse will be 29 when the 2018 World Cup finals are played. He should be at the peak of his career,” Kerr says.

The Socceroos will be looking to feed the ball through to the speedy Queenslander as much as possible in Russia, as he looks to be the nation’s brightest attacking prospect.

Although, at 26-years-of-age, Kruse could hardly be considered an up-and-coming talent. His development has been stunted by a myriad of ill-timed injuries which have held the Bundesliga marksman back from growing to his full potential as a player.

The talent is undoubtedly there, and a fit and firing Kruse spells trouble for any defence.

Australia will need him at his best should they hope to make history and progress further than round 16.