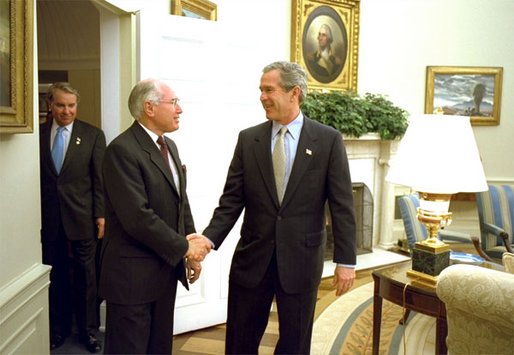 Playing in the background is the sounds of shocked news reporters, sirens and frantic civilians depicting the horror and devastation that former Australian Prime Minister John Howard witnessed firsthand on 11 September 2001.

Richard Fidler then introduces Howard after reinforcing the context of his presence in the US during the terrorist attacks: Howard was there to meet the new president, George W. Bush, and discuss the ANZUS treaty.

Howard, after being asked about his family’s whereabouts during the attacks, does not seem to fully commit to the personal questions.  Fidler tries to gain a quick response from Howard and probes him to elaborate by saying ‘so just putting myself in your shoes then’.  This statement may have been used to coerce Howard to expand or correct Fidler.  Although due to Howard’s extensive experience with interviews this was most probably identified.

Audio grabs from September 11 such as news updates, congress sessions and even a letter from Howard to the American people are played throughout the interview.  This selection of audio, when faded into the dialogue of the live interview, evoke emotion and add substance to the subject matter.

Listeners are exposed to the former prime minister’s strength as a leader and his concern as a family man.  This provides a revealing insight to a powerful individual and his life changing ordeal to what should have been an uneventful international visit.

Listen to the full interview here.

Sean Munaweera is studying a Bachelor of Journalism (Sport) at La Trobe University.  You can follow him on Twitter: @sean_muna