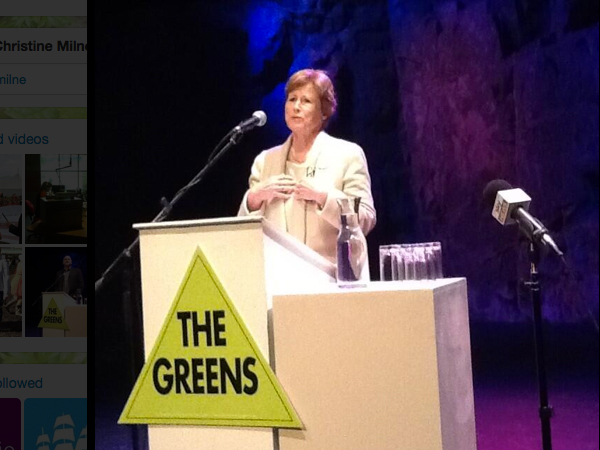 The Australian Greens have welcomed the Prime Minister’s decision to announce the federal election date.

“I am delighted the Prime Minister has ended the uncertainty by telling Australians when they will be heading to the ballot box,” Greens Leader Senator Christine Milne said.

“While Kevin Rudd and Tony Abbott continue to fight each other in a race to the bottom on important issues like climate change and asylum seekers, the Greens are standing up for what matters.

“The Australian Greens will be calling on people to vote for a caring and sustainable Australia and to vote against cruelty and environmental destruction.

“We have our eyes firmly fixed on the big issues that matter to everyone – protecting the environment, building a caring Australia and creating a new diversified, innovative and low-carbon economy.

“Unlike the old parties, we care about what life will be like in 50 years, not just the next three.

“Last election, a record 1.6 million Australians voted for the Greens allowing us to deliver some of the nation’s biggest reforms including putting a price on pollution and helping 3.4 million children access Medicare funded dental care.

“We can continue to deliver positive outcomes for Australia if we maintain a strong voice in the Senate and keep Adam Bandt in the lower house.

“We have strong candidates in every electorate across the country including an outstanding Senate team led by Senator Sarah Hanson-Young in South Australia, Senator Scott Ludlam in Western Australia and Senator Peter Whish-Wilson in Tasmania.

“A Galaxy poll released today shows a surge in support for the Greens in Melbourne with Adam Bandt expected to hold his seat. The two party preferred results show the Greens on 66 per cent compared to Labor on 56 per cent, which is great news for Adam.

“However, we do not take anything for granted and we shall be working hard as a team during this election campaign to maintain our current seats and to increase our vote across the country.

“If you are aged 18 or over I encourage you to enrol to vote so you don’t miss out on having a say at this year’s federal election. Your vote will help determine who runs our country.

“If Australians want a political party they can trust to deliver a healthy environment, caring society and clean economy, then they should vote for the Greens.”