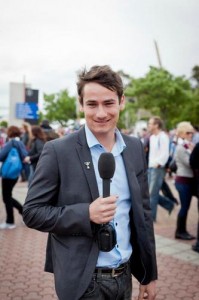 We always knew he was a natural on camera, and so it’s only natural that we congratulate Ryan Murphy on completing a successful summer reporter gig with Gillette Australia.

Gillette put the challenge out to young people across Australia to submit video applications for the summer reporter position.

Ryan, who was then completing his Graduate Diploma of Media Studies at La Trobe University and was part of the upstart editorial team, put together a video and sent it in.

We were secretly confident he’d win, and so it was no surprise when it was announced on the AFL grand final edition of the Footy Show.

We’re sure this experience will lead Ryan to bigger and better things.

In the meantime, he’ll continue to pursue his other passion, music, with his guitar and singing.  He’s not bad at that either.