Ad-blocking software cost $22 billion in revenue in 2015. Caitlyn Leggett reports that media publications are fighting back. 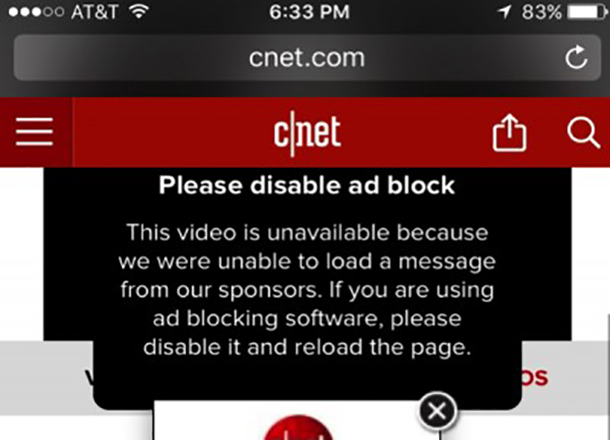 As the internet grows larger and shelves at the news stand get smaller, advertising has had to adapt to the changing nature of online content.

In a society that is more drawn to scrolling through an illuminated LED screen than flicking through pages, online advertising has today become a $50 billion industry.

But software designers and developers have thought of a way to avoid the ‘junk’ plastered across web pages and unwanted pop-up ads that slow down loading speeds.

They have designed applications with the purpose of blocking these ads, creating a nightmare for web publishers who lose much needed potential revenue.

No publication is more outraged by this new technology than The New York Times.

Earlier this month, the publication began testing out new approaches to combat these ad-blocking technologies.

Online readers using ad-blocking apps on their devices were confronted by a message reading; “The best things in life aren’t free. You currently have an ad blocker installed. Advertising helps fund our journalism”.

Readers were then given the option to either subscribe to The New York Times or put the website on a ‘whitelist’ which marks the website as safe and allows their ads to appear.

Initially ad-blocking was available on desktop computers and laptops only, but last year it moved onto mobile devices when Apple began allowing applications that block ads in its app store.

Ad-blocking software grew 41 per cent globally last year with 198 million active users. In 2015, it is estimated to have cost publishers nearly $22 billion.

International publications like The New York Times aren’t the only ones affected by this new trend, as publications across Australia feel the pinch from the software.

Nick Dunlop, Head of Advertising Operations at Crikey says that around 13% of their users install ad blockers.

“It’s manageable now, but if this number increases free sites will cease to exist,” he tells upstart.

Dunlop explains that if people enjoy and regularly consume the content, they should switch off ad blocking while they are on the sites they support.

“Something has to pay the bills,” he says.

Print publication sales across the country have witnessed a downslide in sale numbers, meaning online content and the revenue it raises is more important than ever.

Audit Bureau of Circulation (ABC) statistics in a 2015 report showed that the Age saw a drop of 11.9 per cent in print sales from the same time in 2014. Popular magazines like Dolly (-30.8 per cent) and Famous (-25 per cent) experienced even larger drops in sale figures.

The Herald Sun experienced a loss of 10.5 per cent in print sales from 2014 to 2015 but posted a growth of 12.11 per cent in digital subscriptions in the following quarterly report. In the same report, The Age, The Australian and The Sydney Morning Herald also saw gains in digital subscribers.

As digital subscriptions to major news outlets grow, ad-blocking is causing a bitter feud between developers and advertisers according to Niero Gonzalez, founder of gamer website Destructoid.

“I feel like I’m caught between two parents fighting. There is a valid security and privacy reason to run ad-blocking software, obviously, but then you have the brands who want their ads to pop up and autoplay and take over,” he told the New York Times.

“This is killing the free web.”

The Times may have been the ones making noise about the issue lately, but they aren’t the first to do something about it. Other publications including Forbes recently fought back with their own technology attempting to block the ad-blockers, but with some reprieve.

With more media publications likely to create a stir over the issue, the question remains: of what is more important: funding for online content or consumer choice?