The Collingwood star revealed details of his struggle, coinciding with 'R U OK?' Day. 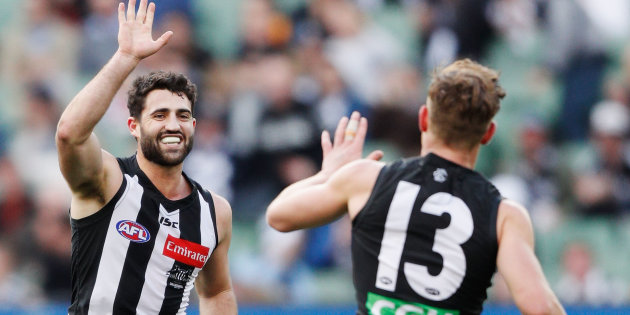 Collingwood player Alex Fasolo has opened up for the first time about his struggles with mental health, ahead of R U OK? Day.

Fasolo, who took a break from football at the end of May, penned an article for Players Voice, where he outlined his battle with depression. 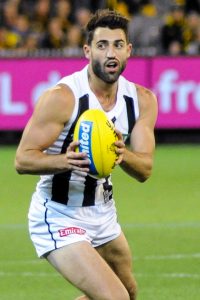 “If I was to be really honest with myself, it’s something I’ve probably been battling for three or four years,” Fasolo wrote.

“I was in denial for a good six to 12 months. Probably longer.”

The star Magpie admitted that opening up to his family gave him the courage to seek further help.

“She [mum] looked at me and said, ‘About time, you’ve been miserable for a few years’.”

The usually flamboyant Fasolo spoke about the idea of having to keep up his outgoing persona.

“I found myself completely disengaging from people… I couldn’t handle the idea of holding a conversation.”

Fasolo isn’t the first footballer to open up about his struggles, with Western Bulldogs duo Tom Boyd and Travis Cloke also taking time off this year to focus on their mental health.

Former Geelong player Mitch Clark has also had a well-documented battle with depression.

Fasolo also spoke about the importance of finding something outside of football, which has helped him.

“A big thing, and something I’m starting to work out, is that I need to find something else in my life,” he said.

“I study away from footy – I’m trying to knock out a psychology degree, ironically.”

Since opening up and seeking help, Fasolo has learnt how to deal with his mental health and how to talk about it with his friends and family.

“I’m OK. I’m gaining more and more knowledge around what I’m going through, and I’m going to take this time and the off-season to really put some structures in place,” he said.

“My advice to anyone else in this situation: stop being in denial. Just go and see someone. And talk to your mates.

Following the suicide of the much-loved Barry Larkin in 1995, his family and friends were left in a state of grief and had endless questions they wanted answered.

In 2009, his son Gavin wanted to honour his father by championing the question ‘are you ok?’, in order to protect other families from going through the same pain he had suffered.

From this simple question, the national campaign R U OK? was born, and is recognised on the second Thursday of September each year.

Gavin was passionate about the campaign, until cancer ended his life in 2011.

Their mission is to inspire and empower everyone to meaningfully connect with people around them and support anyone struggling with life.

1. ASK ‘R U OK?’ – Be relaxed and friendly in your approach, ask them how they are going, and mention specific things that have made you concerned.

2. LISTEN WITHOUT JUDGEMENT – Take what they say seriously, don’t interrupt or rush the conversation. Give them time to think, and show that you’ve been listening and you understand them by repeating what they’ve told you in your own words.

3. ENCOURAGE ACTION – Ask them what they’ve done previously to manage similar situations. Ask them how they want you to support them. Be positive about how professionals can help them.

4. CHECK IN – Make a reminder to follow up and check on them in a couple of weeks. See how they’re progressing. Stay in touch and be there for them.

Today is #RUOKDay! It’s reminder to check in with those around you and ask #RUOK, listen, encourage action and check in. pic.twitter.com/nahIrRemFh