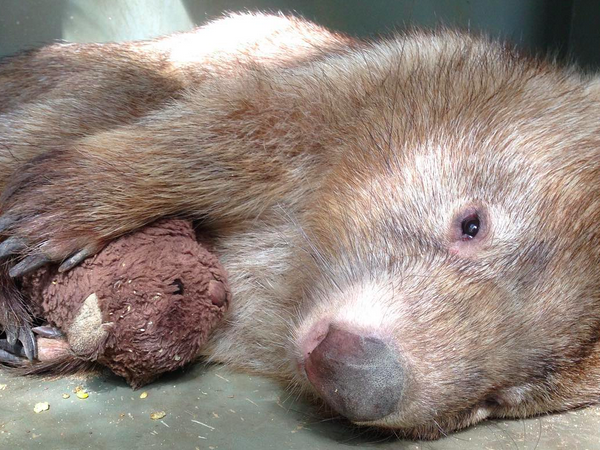 Earlier this month, R U OK? Day served as a reminder to check in with family and friends to see how they’re feeling.

With over 65,000 suicide attempts annually, it’s important to keep an eye on the mental health of those around you.

But humans aren’t the only living beings susceptible to depression.

A wombat named Tonka, who lives in Queensland’s Billabong Sanctuary, was recently diagnosed with depression after his mother was hit by a car, leaving him to fend for himself.

Photos of Tonka cuddling a stuffed teddy bear went viral, however the sanctuary said the bear had become his only form of comfort.

A recent study by National Geographic found that animals have the same basic brain wiring for emotions as humans. This means they’re capable of developing depressive tendencies if they’re ever feeling lonely, guilty or neglected.

The study reviewed rodents, primates and fish, who had lacked interest in their environment and fellow animals.

The depression was measured by interest in food, motivation for sexual activities, social interaction with their animal friends, and sleeping patterns.

Assistant professor of neuroscience at the University of Pennsylvania, Olivier Berton, found that a symptom of the animals’ depression was anhedonia.

This is where the animals have a decreased interest in pleasurable activities that they once used to enjoy.

Dog owner, Lizzie Knight, tells upstart that when one of her two dogs, who had lived together for many years, passed away, the other dog showed signs of depression.

“My family knew that putting our pet down would have consequences on everyone, including our remaining dog,” she says.

“When he started to not enjoy being pat or eating the great deal that he used to, that’s when we knew he was suffering from severe sadness.”

This depression, however, can lead to self-harm. This is seen when dogs scratch themselves until they bleed, or when birds pluck their own feathers, for example.

Vets recommend that pets with depression should be walked regularly, given mental stimulation, and regular contact with other animals. Vets can also prescribe domestic animals with antidepressants to treat their symptoms.

Humans who suffer with depression often do so because of changes to the emotional part of the brain, called the hippocampus.

For animals, depression is typically developed from environmental factors.

Dogs brought up in puppy farms, who have experienced abuse, are more susceptible to anxiety disorders and mental health complications later in their lives.

Animals who are abused and neglected often develop a state of helplessness.

They can develop severe social difficulties such as aggression, destructive behavior, anxiety and nervousness towards people and/or other dogs.

Victoria Stilwell, pet behaviour expert and star of Animal Planet’s “It’s Me or the Dog”, tells upstart dogs that come from puppy farms can suffer from anxiety and depression.

“It’s because they have lived in sensory deprived environments where even their most basic needs have not been met,” she says.

“Adjusting to a new life in a home can be overwhelming for some puppy mill survivors, particularly if they have had little human interaction, but with time, patience, and a lot of love, even the most shut down puppy mill dog can transition successfully and become a loving pet.”

Animals are often an important source of happiness for people, so it’s important that we return the favour.