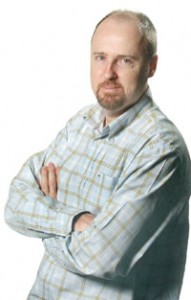 Walkley award-winning journalist and broadcaster. Antony Funnell  joins La Trobe’s Broadcast Journalism class this morning at 9 to launch a unique collaboration between the university and the national broadcaster.

Over the coming weeks, Broadcast Journalism students will – as part of their assessment for the subject – design and develop story segments for the Radio National program/podcast Future Tense, which examines new technologies, new approaches and new ways of thinking.

The best pieces will then be produced and broadcast for a special edition of the half-hour weekly program, to be broadcast in the middle of 2010.

Before taking on his role as presenter and co-producer of Future Tense, Antony was the presenter of The Media Report on ABC Radio National.

Antony started his career as a graduate cadet with ABC Radio News and over the past two decades has worked for many of the country’s leading news and current affairs programs, including AM , PM and the 7.30 Report .

Antony will join this morning’s  Broadcast Journalism class at 9AM in the Hooper Theatre (F5 on this map). All students and staff are most welcome. If you haven’t caught the program yet, you can hear it go to air on Radio National on Thursday mornings at 8:30 (it’s repeated on Friday mornings at 12:30AM). For more details, check out the Future Tense homepage.