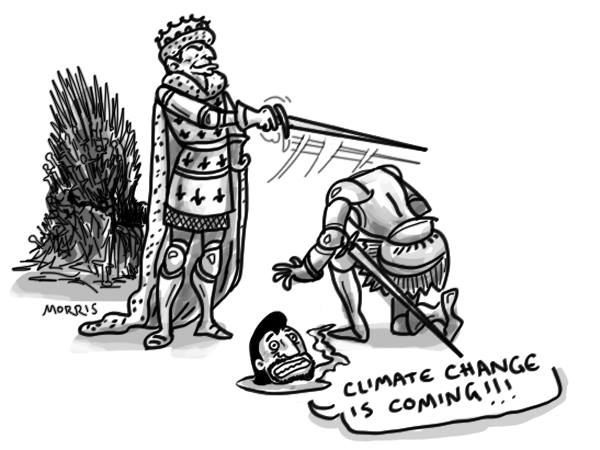 According to the world’s climate scientists, we are living in a world on the brink, with the general consensus indicating that there is a 95 per cent chance that global warming is the direct result of human activity.

So why is effective climate policy still being sidelined?

According to the Fourth annual survey of Australian attitudes to climate change, published by CSIRO in January this year, out of the people surveyed, 62 per cent of climate change believers felt that it was the direct result of human activity.

Despite this, people still ranked climate change 14th out of 16 in “general concerns”, ahead of ‘population’ and ‘terrorism’, and 7th out of 8 “environmental concerns”, barely beating ‘salinity’.

While it is alarming that people hold such a critical issue so low on their list of priorities, it comes as no surprise that such blasé attitudes towards global warming have been able to persist throughout society.

This is a consequence of the broader climate debate in the media and political world favouring climate sceptics. A study conducted by the Australian Centre for Independent Journalism called Sceptical Climate: Part One has found that negative coverage of climate change outweighed positive coverage 73 to 27 percent respectively in Australia’s ten largest newspapers.

The problem with these figures is that it is dramatically disproportionate to the debate within the scientific community because, as of 2013, 97 percent of published climate change research papers have concluded that global warming is anthropogenic.

But while it would appear that most Australians are still on the side of the scientists, the constant debates, naysaying, and doomsday warnings have battered the average Australian’s ‘green conscience’ into apathy.

Interestingly, the Liberal government does seem to be taking some initiative when it comes to climate change, with a spokesperson from the Department of Environment telling upstart that Australia will continue to fulfill its emission reduction obligations.

“The government remains committed to its target to reduce greenhouse gas emissions by five per cent below 2000 levels by 2020,” the spokesperson says.

“The target will be achieved through the Emissions Reduction Fund, which provides incentives for cleaning up our environment through activities such as revegetation, investing in soil carbon, cleaning up power stations, capturing gas from landfill and increased energy efficiency.

While these policies are a step in the right direction for a party that used to claim climate change didn’t even exist, they are still only addressing the symptoms, not the disease.

Why is the government funding a facility that researches how to adapt to climate change, rather than one that works to prevent it?

Interestingly, the climate debate could be changed forever because one of the most important documents in the environmental-research world is so close to being finalised, which could reinvigorate a sense of urgency towards global warming.

From March 25th to the 31st, in Yokohama, Japan, the Intergovernmental Panel on Climate Change (IPCC) is releasing its second part of the Fifth Assessment Report (AR5). Every six to seven years, the United Nations funded IPCC releases climate data accumulated from around the world and consolidates it for the world to ponder.

The Assessment Reports is to provide an expert analysis of global weather patterns, their current and possible effects, and what must be done to rectify human induced climate change.

But there is no point to all of this if policy makers are still not interested in the issue.

The very purpose of democratic society is also its greatest flaw; the election cycle. Politicians only ever think about the short term because they are constantly worrying about getting re-elected, so long term policies that combat long term problems, such as climate change, are a risky platform to be standing on for election in such a fast-paced society.

Therefore, as long as everyday Australians are encountering more immediate challenges in their day-to-day life, as long as the media continues to bombard the public with confusing and conflicting information, climate change will continue to be pushed further down the agenda.

The biggest threat to the planet is not climate change; it is humanity’s inability to change. In the words of Professor Barnhardt from the sci-fi novel, The Day the Earth Stood Still: “It’s only on the brink that people find the will to change. Only on the precipice do we evolve.”

Let us hope this is true.

Campbell Elmer is a third-year Bachelor of Journalism student at La Trobe University, and a staff writer for upstart. You can follow him on Twitter: @CampbellElmer.