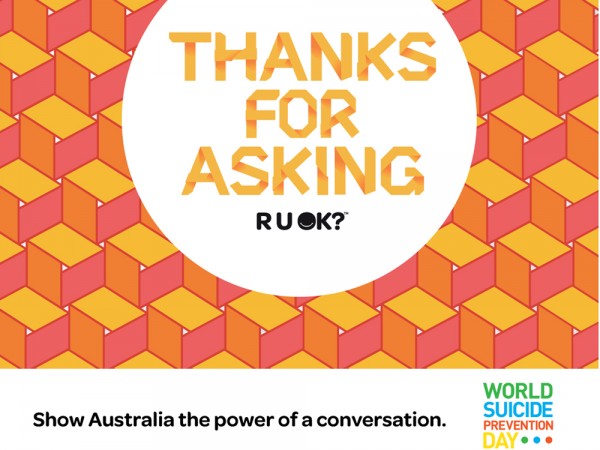 In an Australian first, today is both World Suicide Prevention Day and R U OK? Day.

Events across the country are helping to educate Australians about the signs and symptoms of suicide.

The theme for this year’s World Suicide Prevention Day is ‘Preventing Suicide: Reaching Out and Saving Lives’.

Kim Borrowdale, from Suicide Prevention Australia, tells upstart that the day is about speaking up to reduce the stigma.

“It’s about standing up to make a positive impact on our mental health and wellbeing, it is about being self informed and aware of support and services available to all those touched by suicide and those building a resilient community to prevent suicide,” Borrowdale says.

R U OK? Day aims to encourage conversation between families and loved ones, to help intervene and reduce feelings of loneliness and isolation.

Know someone who’s struggling? Start a conversation that creates a space for them to open up. It could make a world of difference.

According to Lifeline, there were 2,522 reported deaths by suicide in 2012.

This equates to roughly seven deaths from suicide per day.

For every suicide reported, it’s estimated that there are around another 30 attempts. This totals around 65,300 attempts a year.

Researcher and evaluation leader at beyondblue, Dr Stephen Carbone, tells upstart that suicide impairs the lives of those left behind through a ripple effect.

“Unfortunately there are still so many people that take their own lives in Australia and each of those people is connected to their family, their friends, their school mates and their colleagues,” he says.

“The ripple effect is about the impact death by suicide has on those left behind, and that impact can be quite devastating.”

He says that people who experience someone close to them taking their own life have an increased risk of mental health conditions, and suicide, themselves.

“They’re a high risk group that needs understanding and support from people around them as well as health professionals.”

Support After Suicide is a community program that provides counselling and support services tailored to different individuals and groups.

Manager of the program, Louise Flynn, tells upstart the loss of a loved one to suicide can cause a mix of emotions.

“With suicide the person intentionally and deliberately ends their own life so there are certain experiences that go with that,” she says.

“People are asking and trying to understand ‘how come this happened?’ and ‘how was the person at that point?’”

She says that people left behind can often feel guilty and to blame.

“They’re very much wondering if they could have prevented it.”

Flynn says that losing a loved one can affect the mental health of those left behind.

“They will think, ‘have I failed as a parent?’ or ‘was I not a good enough partner?’, those kind of questions are really quite undermining to a person’s sense of self and self-esteem,” she says.

Even in a society where conversations surrounding suicide are becoming less taboo, Dr Carbone says stigma still impairs the ability for individuals to reach out for help.

“People are now more comfortable talking about issues such as depression and anxiety, so we’ve broken down the stigma connected with those, now we think the same thing needs to happen with suicide,” he says.

“You need to talk about it carefully and responsibly, you don’t want to over dramatise it and sensationalise things, but we do need to have the conversation.”

Dr Carbone says suicide prevention programs help those at risk, as well as those suffering from a loss, and encourages the community to take action.

“We need to start taking greater action, the statistics have been steady for a decade, now we want to drive them down and prevent suicide.”

Taylah Burrows is a final year Bachelor of Journalism student, you can follow her on Twitter here: @TaylahBurrows.