The asylum seeker debate has heated up once again with the release of the Houston Report, commissioned by the government in order to break the political deadlock surrounding the issue, and the subsequent changes to the Migration Act. 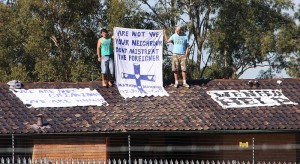 Much media and political attention has been dedicated to the asylum seeker issue over the last two decades but with little public consensus achieved. The debate is trapped in a quagmire of ethical, moral, religious, humanitarian and protectionist ideologies, whether discussed by politicians, the media or your mates down at the pub.

One of the recommendations in the Houston Report that is being implemented is the re-introduction of offshore processing. To support this policy, the government is running a media campaign based around the slogan ‘No Advantage’. The emphasis is that boat arrivals will have no advantage over people waiting in refugee camps. But will this campaign deter desperate people?

It is now even more difficult to detect substantive differences between the policies of the major parties; Gillard seems to have accepted these very Howardesque recommendations. Both sides’ policies appear to be poll and media driven and little reference is made to the facts. These are available on the web, including on Government sites, but they are not highlighted and rarely form part of the debate, especially with regards to ‘boat people’.

Here are some facts to counter some common misconceptions.

Asylum seekers arriving by boat are not illegal

Opposition Leader Tony Abbott has often referred to people arriving by boat to seek asylum in Australia as ‘illegal’. In one statement he said that we take as ‘dim a view’ to ‘illegal arrivals in Australia’ as the Indonesian government does ‘of Australians importing drugs into Bali’.

Some of you may have also seen the frustrating and painful interview on 7.30 with Leigh Sales in which Abbott refused to acknowledge that people arriving by boats to claim asylum were not illegal, further stating that people wishing to claim asylum should come through the ‘front door’ not the ‘back door’.

To argue that people claiming asylum, no matter how they arrive, is illegal goes against both domestic and international laws.

The 1958 Migration Act allows for people to seek asylum in Australia without a legal visa. However, the recent amendments to this Act have, according to The Human Rights Commission, raised various concerns, one of which is that there is nothing in the legislation to safeguard the protection of human rights in offshore processing facilities.

Australia is also a voluntary signatory to the United Nations 1948 Universal Declaration of Human rights in which everyone has the right to seek asylum. The 1951 UN Refugee Convention, to which Australia is also a signatory, forbids countries from penalising those people entering ‘illegally’ when they are seeking refuge from persecution.

Asylum seekers arriving by boat are not ‘queue jumpers’

I’m sure many of you out there have heard or used the phrase ‘they should come through the front door not through the back door’ or ‘queue jumpers’. Sound familiar? Both Abbott and Gillard have spouted this phrase often.

This rhetoric demonstrates a shocking misunderstanding of the situations in which many of the people now claiming asylum in Australia are.

So, what are the options for asylum seekers to come through the supposed ‘front door’ or ‘proper channels’? As Julian Burnside points out, for many refugees there is no opportunity to apply for a visa due to the fact many of them are escaping from persecution and/or death.  He says that in some cases it is not possible to approach an Australian embassy to apply, giving the example of the embassy in Kabul, the location of which is not available due to security concerns.

It is normal to apply for asylum once you have reached a safe country as because of the nature of refugee status, you cannot be in your own country to apply and many of the countries that asylum seekers pass through are not particularly safe.

The other option considered to be through the ‘front door’ is to wait patiently for an undefined amount of time in refugee camps, where living conditions in many are horrific, for the possible chance at being resettled in a safe country. There is no orderly queue of first in best dressed and in total, only one per cent of refugees are resettled every year.

So where is this elusive ‘front door’? It appears to me that there is only one door, through which any person has the right to apply for asylum, their mode of arrival irrelevant.

Boat arrivals are not flooding into Australia

Another misconception is the insinuation through both government and media sources of the huge numbers of asylum seekers supposedly flooding into Australia. The reality of the situation is somewhat different. According to Amnesty International, asylum seekers arriving by boat make up less than 2% of Australia’s annual immigration.

My own experience working with refugees was in South African refugee camps established after the Xenophobic riots of 2008 in which 62 people were killed. Many of the refugees were women and children who were too terrified to go out into the community for fear of persecution.

The UN considered South Africa a safe country and as such many of the refugees were not eligible to apply for resettlement. To see the absolute desperation and fear on these women’s faces, with little hope of salvation, was deeply saddening.

They talked to me about Australia as if it was this golden, almost mythical land. This is the situation for many refugees worldwide and in the end, why wouldn’t they take the risk in the hope of something better in a country with ample resources and land?

The new ‘No Advantage’ campaign does not, in my view, seem likely to convince truly desperate people not to attempt dangerous measures in order to find a safe haven. One could ask whether the intended audience would even be aware of this campaign.

The number seeking asylum in Australia is minimal compared with the rest of the world.  Why then does it get such a disproportionate amount of attention?