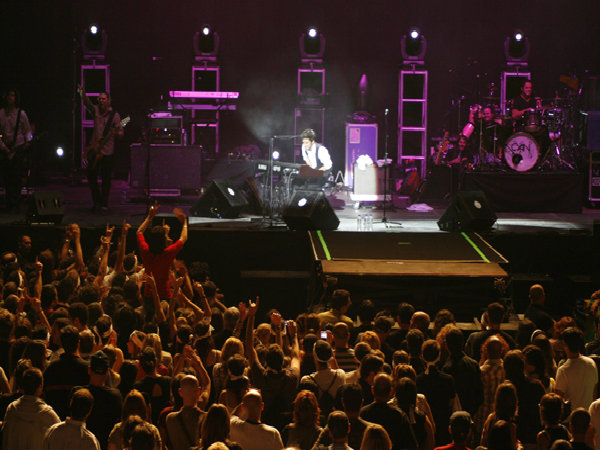 Why do you find yourself pumping Ke$ha before a big night out, LMFAO while at the gym and Celine Dion after a teary breakup?

We are constantly building genre specific playlists to accompany moods. But what effect do these musical choices have on us?

Going to the gym without an iPod or MP3 player is unbearable for many. That motivational jam can be the difference between a gym junkie and a couch potato.

However, the consequences of forgetting your headphones on a trip to the gym can affect your workout more than you might think.

According to a study conducted by Dr. Costas Karageorghis at the Brunel University in London, your workout can be up to 15 per cent more productive if accompanied by music. The findings, published in Dr Karageorghis’s book, Inside Sport Psychology, explains that music provides greater positivity, which allows a person to continue exercising despite feeling tired.

“It can trick your mind into feeling less tired during a workout, and also encourage positive thoughts,” Dr. Karageorghis said in an interview with Raise Your Game.

“It is considered by some athletes to be a legal drug with no unwanted side effects.”

The acceptance of music as a stimulus was acknowledged in 2007 when the New York Marathon discouraged participants from using music devices. The New York Times reported one of the reasons was that it would give them a competitive edge.

Supporting this assumption is a study conducted at the Emporia State University in Lyon County, Kansas which has found that different types of music can effect moods. Through having participants fill out a questionnaire rating their mood while listening to certain genres of music, researchers were able to find an association between anxiety levels and music types.

They concluded that pop and classical music were more likely to inspire happiness when compared to heavy metal.

“There were statistically significant differences in mood based on the effects of classical, heavy metal, and pop music,” the report said.

“Students nested in the heavy metal music… had significantly higher scores (indicating higher anxious moods) than those in both the classical… and pop music… conditions.”

Another study conducted by Media Psychology last year showed that people don’t choose sad songs when they’re down to make them feel worse, but rather they felt cheerful music would be unsuitable at the time.

“It is possible that sad individuals intuit that listening to happy songs would feel inappropriate or wrong. If so, they may factor such prospective feelings of impropriety into their judgments regarding the hedonic impact of listening to happy music,” the report said.

There is also a popular belief that listening to classical music, particularly Mozart will make you smarter. While this does sound like an all-too-convenient quick fix solution, various studies have supported this claim.

The “Mozart Effect” and the Mathematical Connection, a study conducted last year, found that students were more likely to perform better in mathematics if they were listening to Mozart. The average score of the students who listened to his music was far higher than those who simply studied in silence.

“The mathematics performance assessment mean was higher for the Mozart group (82.66) than for the silence group (77.80).”

“The Mozart Effect does impact the demonstration of learning in mathematics. Whether it is through priming cortical firing patterns, reducing anxiety, and/ or generating arousal is a theoretical matter beyond the scope of this experiment,” the study found.

However, there are limitations in these experiments and there is a need for more research to find a stronger correlations between music and mood. For example, the Emporia State University study stipulated that lyrics could also have an effect on the outcomes.

For now, I think I’ll put down my 27 cats and hit the gym. Maybe Beyoncé can make me 15 per cent more likely to burn off those drinks I had with Ke$ha last night.