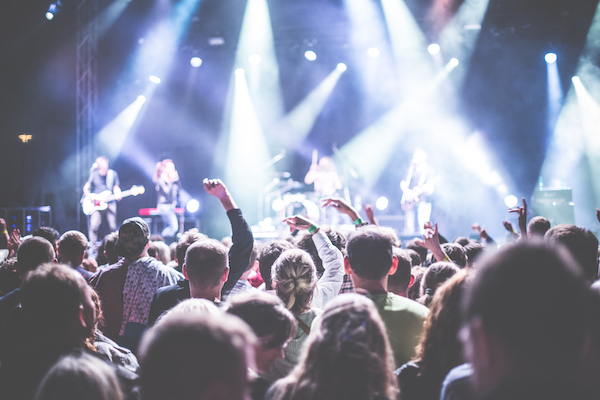 I want you stop for a second and think back to the last live music event you attended in Melbourne.

The crowd. The atmosphere. The sound. The talented people before your eyes.

It’s a pretty amazing moment, isn’t it? A moment, that may now be under threat.

Without a doubt Melbourne is the live music capital of Australia.

Each year, 12.5 million patrons attend over 62,000 live music gigs. There are approximately 350 annual festivals across Victoria. And Richmond’s Corner Hotel is a regular feature in Pollstar’s top thirty live music clubs in the world, based on ticket sales.

The economic value of live music in Melbourne cannot be denied either. Over $250 million is generated in ticket sales alone, and for every $1 spent on live music, $3 is returned straight back into the economy.

So why are some of Melbourne’s oldest and most loved music venues closing up shop?

In 2016, The Age reported that the Palace Theatre was to be demolished and a hotel built at the site.

Built in 1912, the theatre had hosted the likes of The Black Keys, The Killers and Arctic Monkeys, and was listed by the National Trust.

Groups, such as Melbourne Heritage Action, became concerned in 2013, after the theatre was sold to Chinese developers for $11.2million. Despite campaigning for the next three years, they were unable to save the venue.

It wasn’t long until alarm bells began to ring in for live music lovers and artists alike.

Singer-songwriter Darcy Fox is one of those musicians. At 24, she’s been on the live music scene for over eight years, across Melbourne and her home region of Gippsland. Despite her years of experience, Fox admits that these closures are having an affect.

“Melbourne’s music scene is already hugely competitive. With less places to play, and just as many musicians trying to do their thing, it becomes so much harder to get work. It’s a scary prospect, because it’s difficult enough at the best of times,” she tells upstart.

Despite legislative reforms in 2014, whereby mitigation and compliance regarding noise complaints is the responsibility of property within 50 meters of a live music venue, bars, band rooms and theatres alike are still being affected. 2016 also saw the closure of not-for-profit bar, Shebeen, regarding liquor licensing and noise issues.

The fans are one thing, and the business owners are another, but the impact of these closures truly lie on the local musicians who often play multiple gigs a week, just to pay their bills.

Reigning from country Victoria, Fox’s music is her livelihood. She notes that the live music scene isn’t just changing in Melbourne, but elsewhere also. Regional cities, especially those that are hosting tours of large-scale Australian, and international acts, are being impacted.

“The Babushka Bar in Ballarat has just closed and Sutton’s House of Music, also in Ballarat, is closing as well. It’s really sad, because they’re great spots for original artists, especially those who are starting out or are from the Ballarat area,” she tells upstart.

It is with deep regret that we've had to announce our closing at the end of October 2017. After much discussion with our real estate agent unfortunately we have been advised a new lease will not be forthcoming. Just some of the names we're proud to say have graced our stage are; @jojocamilleri @dansultanmusic @ianmossmusic @rosswilsonofficial @diesel_music @beccy_cole @lloydspiegelmusic @lang7130 @jordielanemusic @katie_noonan_music @realthingrussellmorris @deborahconway @ajharvey4 @mentalsofficial @lanielane @kimchurchill1 We now fight to protect the interior of the original Ballarat Music House. Please sign and share and help #protectsuttons #makeanoise https://www.change.org/p/ballarat-city-council-protect-the-interior-of-the-suttons-building

Melbourne cover-artist Jena Marino, also believes that original artists have their work cut out for them.

“I’m in the cover scene and it’s even hard for us to get gigs against well-known bands. I can’t imagine how much harder it would be for singer-songwriters especially with the closing of venues such as Shebeen and The Espy, two examples of well-known venues for original artists to come down and showcase their talent,” she tells upstart.

Both artists agree that support for local musicians is crucial, and that it has to be driven by music fans. Without this, the endless cycle of failing businesses will continue to affect the livelihoods of those working in the industry.

“The best gigs are the ones with the best crowds, so attendees are crucial in creating the atmosphere.

“It’s hard, obviously money is the bottom line, and venues need the money to stay open. I think people need to support live music as much as they can because obviously we’re seeing a lot of venues get closed down,” Fox says.

No doubt it is important for live music venues to stay open for the purpose of making a living. However, the more support local artists have, the more inclined they are to support the scene. As a result, they can continue creating and developing their skills as musicians and live performers.

“I think having a support also brings that support to yourself as an artist to know that your show is well versed and under control. They also can help spread the word about your show and can help bring a crowd to your event and ramp ticket sales,” says Marino.

Fortunately, despite how it seems, the government is continually acknowledging the importance live music plays in Melbourne.

As of July 1 2015, venues with a capacity of 200 or less will be able to sell alcohol after 1 am by applying for an extension. Around the same time, the Victorian Government also announced a $250,000 Live Music Noise Attenuation Assistance Program, assisting owners whose venues may be at risk of noise complaints.

There are also some fantastic initiatives helping up and coming artists find their way through the tough scene. Melbourne Music Week is a nine-day festival held towards the end of each year, celebrating Melbourne as a music hub and also highlighting just some of its brilliant artists.

Awards ceremonies such as Bank of Melbourne’s annual Melbourne Music Bank, and The Age Music Victoria Awards are also ensuring that artists are getting the support they need in such a competitive environment.

15 acts for 15 great years. In 2013, as part of #MMW, @lostlonesome celebrated its 15 years by throwing a huge birthday bash with 15 live performances at the Meat Market. The hefty line-up included Great Earthquake, Milk Teddy and Monnone Alone.

The biggest support base for musicians however, is us: the listeners and fans.

“Just spread the word about these guys. They work so so hard and they spend so much time and money to put their craft together. If it is their passion, their work should be celebrated,” says Marino.

With the right support networks in place, and with enough musicians on the scene to keep is lively as it is, Melbourne should see a halt in venue closures. Getting behind local artists and businesses is the key to ensuring that there’s an abundance of gigs for devotees to attend all week long.

Jordyn Hoekstra is a second-year media and communications (journalism) student at La Trobe University. You can follow her on twitter here.