The City of Melbourne is under fire for crushing abandoned oBikes. 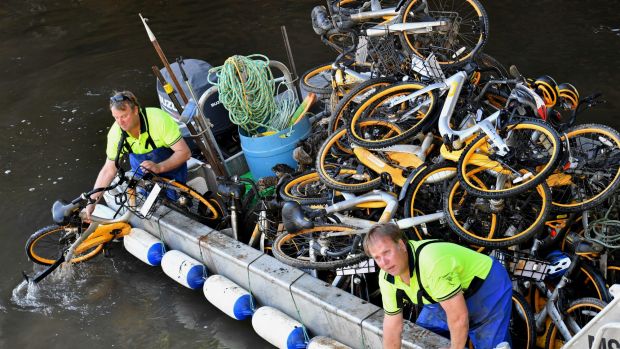 Workers fish out 42 oBikes from the Yarra River

Melbourne City council has been criticized by cycling group, ‘Bicycle Network,’ for recycling oBikes that have been dumped throughout the city and suburbs.

This comes after 30 of the yellow bikes were relegated to a scrap heap in Blackburn to be crushed and then recycled.

Spokesperson for oBike Australia, Chethan Rangaswamy was not notified that the bikes were being confiscated from the streets.

“We haven’t received any notification,” he told the Herald Sun.

Chief executive of Bicycle Network, Craig Richards voiced his distaste for what the council was doing to the bikes.

“The better alternative would be for oBikes to be available for people to hire and use as a healthy transport option that reduces congestion and eases the load on our public transport systems,” Richards told the Herald Sun.

Since its launch in June of this year, the Singapore based bike rental company has ignited debate in the media. In August, upstart published an article asking whether this system of dockless bike sharing would be able to work on the streets of Melbourne.

Recently, photos have surfaced of the rental bikes vandalised and parked incorrectly, with many being thrown into the Yarra river.

Despite the negative use of the bikes, Rangaswamy states that only 15 per cent of the 1250 bicycles were vandalised and only one per cent were lost.

“It seems the damage is being done by a small group of vandals, rather than people who actually use the bikes,” Richards told the Herald Sun.

oBike is currently working on an agreement with the Melbourne, Yarra and Port Phillip councils to improve the operation of the bikes.