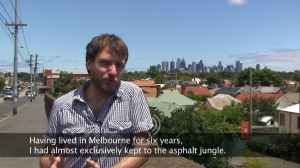 Steinar Ellingsen in The Inland Sea

Steinar Ellingsen first came to Australia from Norway as a journalism student, but during his first six years in this country he rarely ventured beyond the cosy confines of Melbourne.

That all changed, however, when he took off with two other Norwegians and an Australian cameraman on a ten-week trip across outback Australia at the end of 2008.

The impetus for this 16,000 kilometer journey was to not just to get out of town, but also to look for alternative communities beyond the big smoke. The project is part of his innovative practice-based PhD in convergence journalism. (You can see Steinar talking about the origins project at a presentation at La Trobe University in late 2010 here.)

Two years later, the journey has being launched online as a documentary series at Steinar’s blog, The Inland Sea. To quote Steinar: ‘It’s an adventure and an experiment. It’s an online documentary made under mindboggling harsh conditions, while attempting to do too many things all at once. This, in order to replicate a somewhat extreme pressure on contemporary journalists to become ‘Inspector Gadget’ reporters, mastering everything from writing to producing audio-visual material, making singular stories in to multimedia events.’ It’s also a bilingual project, with much of the commentary in Steinar’s native tongue (but don’t worry, there are subtitles).

Check out the first episode here and let Steinar know what you think. And stay tuned for more in the weeks to come.