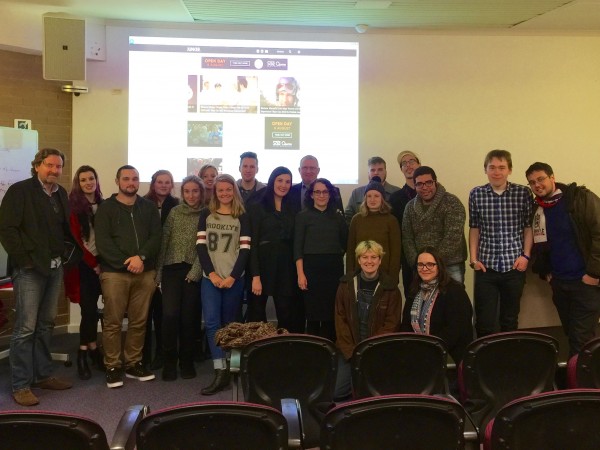 The current managing editor of Junkee, Steph Harmon, was actually contacted on LinkedIn to fill her current role.

The publication launched in early 2013 and Harmon has been there ever since.

Harmon visited La Trobe University yesterday to give students an insight into her experiences in the media industry.

She said that Junkee is aimed at a youth audience, but more broadly people aged between 18 and 35.

“We want to cut through the noise,” she said. “When there’s something big happening we like to look back and see if a message has been lost in the churn of the subject.”

Junkee only have a few editorial members, so they rely a lot on freelance journalists for content. Harmon said they’re always looking for new writers who have original ideas.

“A lot of young writers see an article they like in the New Yorker and decide to re-write it,” she said. “I’m looking for a writer who’s got a story to tell and is the best person to tell it.”

She said that freelancers are paid for content, but unfortunately Junkee doesn’t “pay well”.

from now on i shall reply to every follow-up with a picture of my Unread email count being squeezed out of a sweaty, clenched intestine

Harmon thinks that Junkee benefits from having a small team because it means there are faster turnarounds, but sometimes stories can be missed because there’s not someone to cover it.

“Last week, we missed the boat with the Adam Goodes story,” she said. “It kind of started breaking late on Sunday, by Monday everyone had written about it, on Tuesday everyone had already discussed whether or not it was racist, and I got pitches about it on Wednesday.”

She said that an angle she thought was lacking in the media coverage so far was one with an Indigenous voice.

Harmon said she wants pieces on Junkee to be smart and funny, but also original. “Has the writer Googled the piece and seen that there are already ten articles on that topic out there?” she said.

She said that this constant pressure can cause a lot of anxiety.

“I came from a print background, where I was delighted to have zero feedback from the audience about what we’re doing wrong,” she said. “Some people will subscribe to your page, but go to your inbox and say you’re ruining their lives with your articles.”

“Every negative comment makes me a little more sad and anxious,” she said.

The internet isn’t all negative for Junkee. She said it’s important to know what people are reading and what they agree or disagree with.

“It’s good to know how people are engaging with what you’re writing,” she said. “Digital publishing is a conversation between the editors and the audience.”

“No one really goes to home pages anymore, everyone’s coming from social media,” she said.

Junkee gets 70 per cent of its traffic from Facebook. “We actually worry about how much we rely on Facebook,” she said.

“I have traffic expectations, but we don’t want click bait, we want clickable,” she said.

She said that for Junkee, Twitter is just a toy. “It’s just journalists talking to each other,” she said. “No one actually clicks on links, unless you get a re-tweet from someone famous.”

Junkee has over 53,000 followers on Facebook, but Harmon admits that they are still a small publication.

Her advice for future journalists? “I think speciality is really important,” she said. “Working out what you’re interested in because it means you have a story to tell and you’re the best person to tell it.”

She also said that experience is paramount. “I would definitely recommend as much experience as possible so that you’re publishing more,” she said. “I would have loved more hands on experience at uni.”

If you want to pitch an idea to Junkee, visit their website for more information, or send an email to: hello@junkee.com.

Joely Mitchell is a third-year Bachelor of Journalism student at La Trobe University and the editor of upstart magazine. You can follow her on Twitter:@joelymitchell.