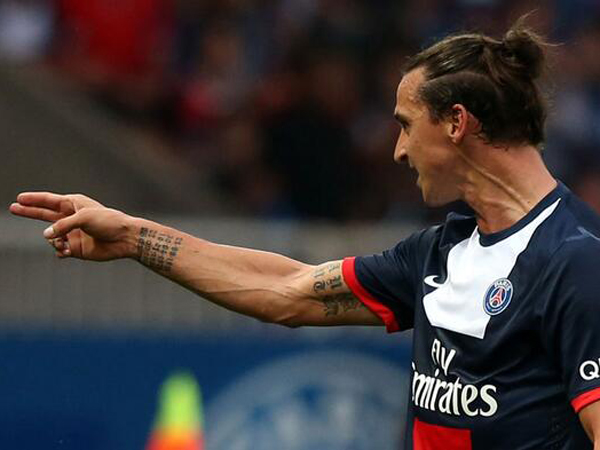 The red and white half of Madrid is in dreamland at the moment as it boasts a perfect record after eight rounds of La Liga. This is all the more astonishing considering the sale of star striker Radamel Falcao to Monaco in the summer transfer period. The move has meant that striker Diego Costa has shouldered far more of the goal-scoring responsibility – and so far he hasn’t skipped a beat, sitting equal top in the race for the golden boot with Lionel Messi.

Manager Diego Simeone has steadily improved his Atletico team and so far it has paid off, as it looks likely that the club will better the 76 points it amassed last season to seriously challenge Real Madrid and Barcelona at the top of the table.

The world according to Zlatan

The iconic Swede is facing disciplinary action after he mimicked pointing a gun at the Toulouse bench in his side’s 2-0 win just under two weeks ago. It is believed that the gesture was meant for former Juventus teammate Jonathan Zebina, who he reportedly clashed with on various occasions during their playing days together.

It was a mixed week for Ibrahimovic, following reports that a Parisian restaurant had named a burger after him, in homage to the star. ‘Le Zlatan’, at a whopping 600g, which also comes with an inflated price tag of almost €30, was created by cafe owner Jean-Philippe Grandin, who said he wanted to create “an exceptional burger, which really stands out from the crowd, in the image of Zlatan Ibrahimovic”.

It was obviously inspiration enough for Ibrahimovic, as he scored the winner in PSG’s triumph against fellow title-challenger Marseille over the weekend.

Arsenal’s away record comes to a halt

After 12 away wins in a row for Arsene Wenger’s side, the record came to an end at the hands of a spirited West Bromwich Albion side. Claudio Yacob’s first half header was cancelled out by vintage Arsenal passing, that resulted in a goal from midfielder Jack Wilshere.

While Arsenal’s successive away-win record did not include any of the top six in England, it did claim the very impressive scalps of Fenerbahce and current European champions Bayern Munich.

Arsenal sits top of the pile after seven rounds, with the title firmly in its sights, but long-suffering Gooner faithful are keeping a lid on things for now.

Much like life itself, many things go in and out of fashion in football both on and off the pitch, and the rabona has made a glorious comeback.

The term ‘rabona’ is essentially a move whereby the kicking leg is wrapped around the standing leg to execute a cross or shot – here’s a great example by Argentine legend Diego Maradona.

Real Madrid’s Angel Di Maria, who has shown a penchant for the odd rabona in the past, kicked off proceedings with a lovely assist for Cristiano Ronaldo against FC Copenhagen last week. Both Liverpool’s Luis Suarez and Swansea’s Wayne Routledge both tried their luck over the weekend but sadly lacked the final product.

Juventus triumphed against fierce rival AC Milan, with Juventus star Andrea Pirlo scoring directly from a free-kick, and it was all smiles in Turin – except for the subdued looking playmaker.

With talks of a potential exit surrounding the 34-year old and speculation of summer moves for a host of younger midfield targets, Pirlo’s imperious time in the midfield could be coming to an end.

Juventus has picked up 19 points from a possible 21 so far this term, but has looked off colour and isn’t dominating games with the same class it showed last season. It needs to keep Andrea Pirlo happy, as he is as crucial to its hopes of retaining the Scudetto, as well as triumphing in the Champions League.

Chris Hearn is a Bachelor of Journalism (Sport) student at La Trobe University. You can follow him on Twitter: @ChrisHearn08.