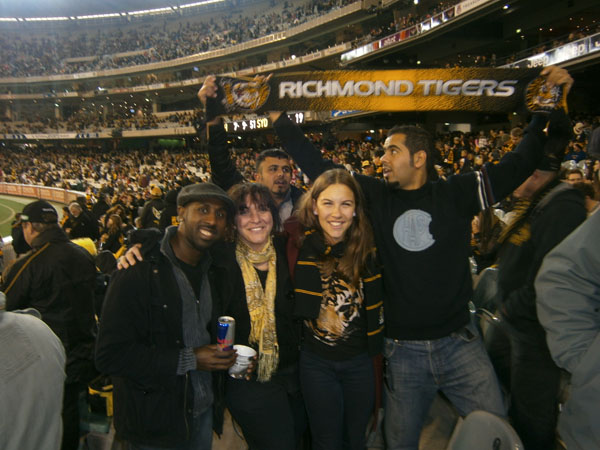 Dana Affleck is a passionate advocate for asylum seekers, and is taking groups of them regularly to Richmond home games. Volunteering once a week at the Edmund Rice Asylum Seeker Project in Richmond, Affleck organised the outings to help introduce the newcomers to Australian culture and was given 30 season passes by the Richmond Football Club.

For the 23-year-old, the aim of bringing these groups to the football is to help them assimilate into a culture that they are well and truly new to.

“Basically I wanted to create or help foster a relationship between these newly arrived people and the city they live in,” Affleck tells upstart.

“I felt like asylum seekers feel a bit rejected by society—especially the way the politicians talk about them and the way that people talk about them—they obviously are aware and I wanted to make them feel more welcome and feel like its their home and its not just some place that they’re imposing themselves on.”

Twenty-year-old ‘Haidar’ is one of the regulars going to the Richmond matches with Affleck. His story, just like every other asylum seeker and refugee, is a frightening one.

Haidar came to Australia when he was about 18 years old from Quetta, Pakistan. Originally from Afghanistan, he was forced to flee due to his ethnic Hazara heritage, people who have been heavily oppressed by the Taliban, who still have control in some areas across the Middle East. Fearing possible execution, many including Haidar cross the border into Pakistan.

He raised his own money, sold property and took loans from family and friends in order to fund his trip. He got to Indonesia, then came by boat to Australia and successfully obtained a bridging visa. He now works at a café in Melbourne’s east, taking full-time English classes and plans to undertake adult VCE.

It’s heartwarming to hear Affleck say that Haidar is eager to continue to make something of his life and is responding to the football excursions.

“He likes the Tigers and he’s printed out the words of the song so he tries to sing along—he’s just really keen, so he gets really excited,” she says.

“He’s trying to learn the rules and he brings a notebook with him [and] pencils down things that are happening.

“[At the] community centre he’s always the one that does all the dishes and he helps cook the food—he’s just really enthusiastic and I think he’ll be going to the football forever now.”

It seemed appropriate when Affleck took a group to see Dreamtime at the G last Saturday, the annual fixture for Richmond against Essendon as part of Indigenous Round. While it didn’t relate directly to the people she took, Indigenous Round is often linked with a general stance against racism and acceptance of others. For those who have come here seeking a better life, it was a suitable time to reflect on where they are and where they have come from.

However, the weekend was somewhat marred on Friday night, when a 13-year-old Collingwood supporter was escorted from her seat after directing a racist slur at Sydney champion Adam Goodes, who pointed her out to MCG officials.

Just received a phone call from a young girl apologizing for her actions. Lets support her please#racismitstopswithme #IndigenousRound

It has been important for the AFL to take the positives from the situation, and to quote Collingwood president Eddie McGuire, “be evolutionary, not revolutionary”.

Affleck was not put off by this incident: not because it was “isolated” as AFL CEO Andrew Demetriou put it, but for the opposite reason.

However, she says that her experiences have been positive with the group and any abuse she has witnessed has only ever been directed at players.

“The guys want to interact with people and just making friends, so they usually smile at other supporters or try and make it a community thing, and people I find respond well to that,” she says.

As for the player abuse, Affleck believes that the majority of these incidents are not purely racist—the sledging is reactive.

“I think that their underlying racism comes out when someone who is from another culture does something they don’t like,” she says.

“I still think that’s really dangerous because it’s almost like this hibernating hate that can come out at any moment; but I couldn’t really imagine a situation where the guys that I know would be targeted simply for being at a game.”

Affleck believes that overall, the excursions are positive in two possible ways: either those attending love the game of AFL itself and are given one more thing to cherish and learn about; or they do not fully connect with the sport but are happy for an excuse to leave the house and be with friends.

“They’re usually left to live on about six to seven dollars a day after paying rent, so they can’t really afford anything. Just to give them a free activity basically stops them from being extremely depressed and sitting home alone,” she says.

Affleck’s example is one to follow—using our great sport and some team spirit can have the power to do so much for those so desperately seeking refuge in this country.

Andrew Miller is a third-year Bachelor of Journalism (Sport) student at La Trobe University. You can follow him on Twitter: @AndrewTPMiller