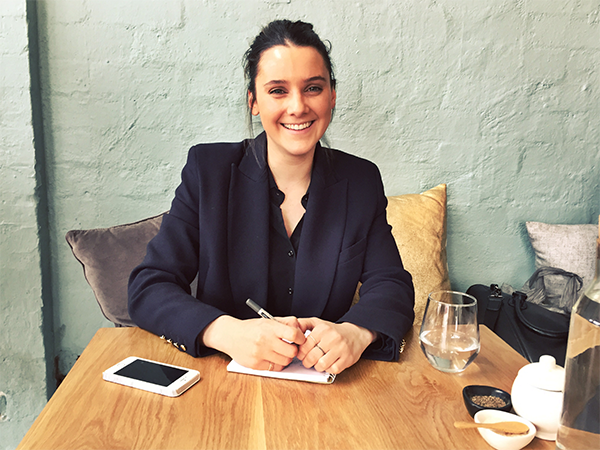 She’s 23-years-old and editor of a fashion magazine.

Anna Wintour, Jackie Frank and Edwina McCann are all names that might come to mind when you think of a typical fashion editor.

But these fashionable ladies have at least 20 years on Giulia Brugliera.

Brugliera began her time at Fashion Journal as an intern. Within 18 months she had become full-time online editor and second in charge of the magazine.

In an industry where internships are practically mandatory for any post-graduate job seeker, Brugliera’s story is encouraging.

“I was studying a Bachelor of Arts and Law at uni and had to do an internship for one of my subjects,” she tells upstart. “I was meant to be at Fashion Journal for six months but that stretched out to a year.”

Brugliera says she stuck around because the experience was invaluable.

“My work was getting published and I was making connections with people wherever I could. I’d get sent to runway shows and just introduce myself to whoever I was sitting next to,” she says.

“I just tried to be personable and to take every opportunity. Two [years] ago I made a mix tape of Christmas songs for everyone in the office.”

While the previous online editor was overseas, she took the opportunity to obtain some paid work. A couple of months later, the online editor had moved on, so Brugliera applied for the full-time position.

“I was worried about going for it, but I thought what do I have to lose?” she says.

Turns out she had nothing to lose.

Well if that ain’t a childhood dream right there. My first ever Editor’s Letter ☺️ @fashionjournalmagazine

Fashion Journal is an online and print magazine owned by Furst Media.

Along with a team of contributors, interns and freelance graphic designers, Brugliera and editor Leah White are a two-woman show.

“People would be surprised to know that Fashion Journal is run by just two full-timers,” Brugliera says.

“That’s it for a magazine that is distributed Australia-wide, to over 105,000 readers.”

She says she has many different responsibilities as online editor and account manager.

“I wear a lot of hats. My day usually consists of reading press releases, being on top of any relevant stories that have developed overnight, getting content up on the website and replying to emails,” she says.

“We’re a free magazine so we make most of our money through advertising.”

“I’m always open to learning and improving. There’s that saying that once you think you know it all, that’s when you’re out of the game.”

She says that perks do come as part of the job, including backstage passes to music festivals, dining at secret launch parties and even limited edition sneakers.

Despite this all, Brugliera says the best part of her job is that the work is interesting.

“It’s work that’s not really work. It’s what I would be doing anyway,” she says.

When you overhear people using hashtags in real life 🙈

Working on the set of editorial fashion shoots is another perk she enjoys.

“We shot with the winner of Australia’s Next Top Model and I had a major fan girl moment.”

She says for those trying to make it in the fashion mag world, it’s important to not burn bridges and to always follow up.

“Be personable and network. It’s a cliché but it really is not what you know but who you know, building relationships is crucial,” she says.

“Work hard, be open and always say yes to an opportunity.”