She's the First is raising money for girls in low income countries to receive an education, writes Katherine McLeod.

When a girl is educated, she earns 20 per cent more per year of schooling she finishes.

She’s the First is a non-profit organisation that sponsors girls’ education in low-income countries. It launched November 1, 2009 as a YouTube video and after receiving a good response, co-founders Tammy Tibbetts and Christen Brandt were inspired to expand the organisation with the hope of creating global change.

In July 2011, it became an official 501(c)(3) organisation and ran entirely on volunteer efforts up until May 2012, when founder Tibbetts was hired as its first employee.

By providing scholarships to girls in low-income countries, the organisation aims to cultivate the next generation of global leaders.

She’s the First works to promote education opportunities and provide mentorship in 11 countries around the world, such as Sierra Leone, Ethiopia, Kenya, Guatemala, India and Nepal.

One hundred per cent of donations to the scholarship fund supports girls in low-income countries, many of whom who will be the first in their families to graduate high school.

La Trobe University’s Melbourne campus is the first and currently only Australian chapter of the organisation. Hannah Ryan founded the La Trobe chapter after interning at She’s the First’s New York headquarters.

“I went on exchange in 2015, and got an internship with She’s the First. I wanted to keep doing something that mattered when I came back, so I started the La Trobe chapter,” she tells upstart.

Founded in 2016, She’s the First La Trobe was awarded the 2016 club and society of the year in La Trobe’s student union awards in October.

The La Trobe chapter relies on donations and fundraising to raise money.

“We did the Melbourne Marathon on October 16th this year, and it was our main fundraiser for the year. We managed to complete our goal of giving three girls scholarships at the Kopila Valley School, in Western Nepal,” Ryan says.

“Our running team was made up of volunteers of seven different nationalities, and a mix of exchange and international students. I’m very proud of the effort that we all put in.”

So far, La Trobe’s She’s the First chapter has raised $1,831 from the run. You can still donate to their cause here. 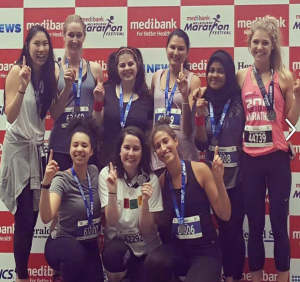 Katherine McLeod is a third year journalism student at La Trobe University and a staff writer for upstart. Twitter: @kattt_mcleod