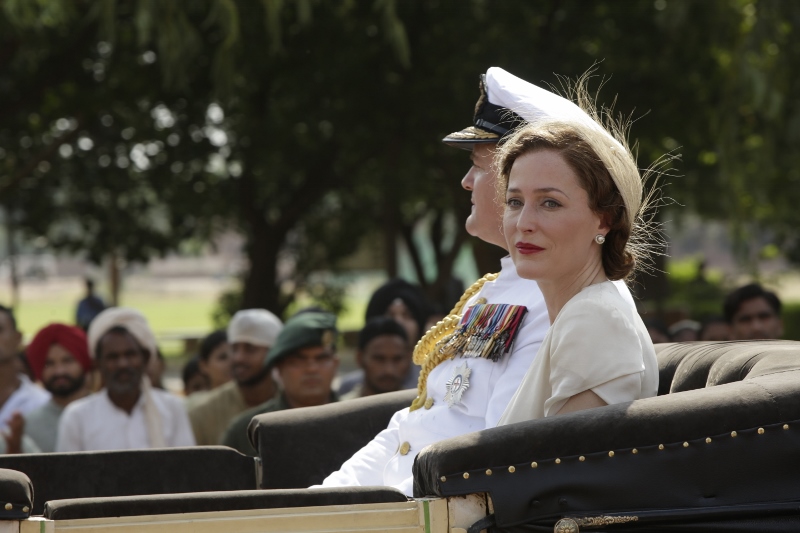 A historical drama, Gurinder Chadha’s Viceroy’s House is set in 1947 on the eve of Indian independence.

After 300 years of British colonial rule, the Empire has decreed India will become independent and dispatches royal personnel – Lord Louis Mountbatten (Hugh Bonneville) and, his wife, Lady Edwina Mountbatten (Gillian Anderson) – to oversee the final logistics of the transition of power.

Upon his arrival, however, Mountbatten learns that India is in the grip of bloody violence and rising tension between its diverse faith-based groups – Muslims, Hindus and Sikhs.

The political ruling class of India, which includes British and Indian representatives, urge Mountbatten to manage the maelstrom in different ways.

In the end, Mountbatten endorses a plan which results in the carving up of India into two nation-states: Pakistan (predominately Muslim) and India (predominately non-Muslim). 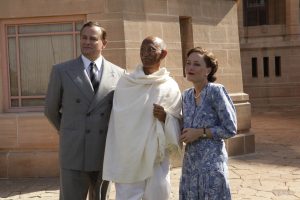 Its characters are richly drawn, humanised through a deft balance of comedy and drama and marvellously realised by an impressive cast of British and Indian actors.

The film’s set design and cinematography are exquisite and expressive, and its story a gripping retelling of history.

The partitioning of India resulted in one of the largest refugee crises of the time, displacing millions of Indians who were forced to move between the two nation-states, and a rising death toll as violent recriminations continued.

For Chadha, whose own family was affected by the upheaval that the partitioning of India created, the act of retelling history was political.

“The film starts with the quote ‘History is written by the victors’. Everyone has the right to interpret history as they see it,” Chadha tells upstart.

“It’s just – who has the power to actually get their version out there?”

In Viceroy’s House, Chadha retells history through two perspectives – the political leaders and the Indian people. 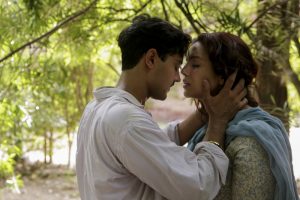 The opulence and formality of the Viceroy’s House (where the Mountbattens resided) is contrasted with the dust-swept village neighbourhoods where the Indians live.

The behind-closed-doors deliberations of political leaders is contrasted with the dramas of the heart of the Indian people, such as the romance between Jeet (Manish Dayal) and Aalia (Huma Qureshi), two servants at Viceroy’s House, whose desire to be together is – much like India itself – continuously thwarted.

Chadha capitalised on the overlap of these two perspectives within Viceroy’s House itself, where Indian servants passively eavesdropped on political meetings that deliberated the fate of their country. Chadha went to great pains to capture this double vantage point within individual shots.

“I was very excited when I planned the scene with Mountbatten and Jinnah [leader of the pro-Pakistan movement],” she says.

“That could have been a very talky scene between the two men but then I had the servants come in and put the tray down. And then through the mirror you can see Mountbatten and Jinnah but I was foregrounding the servants’ faces. One was pro-Pakistan, and one wasn’t.

“Those sorts of things I worked hard on and that’s how I maintained the ‘upstairs, downstairs’ narrative split.”

Viceroy’s House was conceived eleven years ago when Chadha, who grew up in London as part of the Indian diaspora, returned to her home village in Pakistan for the first time.

“We found my grandfather’s house. This was the house which my grandmother had left with her 5 small children in 1947 and that house now had several families living in it, who themselves had been refugees, coming from the other side. It was at that moment when the reality of it hit home to me.”

“At that moment I felt I needed to tell this story and I wanted to tell it by focusing on ordinary people who got caught up in the big political decision-makers’ negotiations.“

They read almost 20 books on the subject, met with academics as well as people who lived through the era, including Pamela Mountbatten (the Mountbatten’s daughter).

The stories they gleaned from these firsthand accounts are reflected in the film’s rich detail.

“The film is full of things that actually happened because somebody told us about them,” she says. 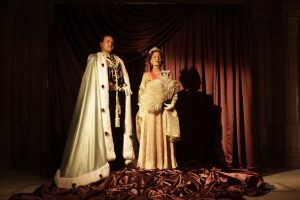 Chadha’s personal experience as a refugee who fled India and went on to grow up in Britain means the final film reflects a different sensibility and attitude than if she had grown up in India or Britain alone.

“I was trying very hard to make a film that is British-Asian.

“It’s not an Indian film. It’s not a Pakistani film. They would make very different films on this subject. It’s also not a white British film.

“It combines Indian and British perspectives to tell a story of a particularly sad episode in India’s history.”

A true global citizen, Chadha’s stance toward the characters in Viceroy’s House is non-partisan.

Steering clear of simplistic binaries of good vs bad, she chooses a complex and nuanced representation for her characters. This was especially important in Viceroy’s House given the charged nature of the source material.

“My aim was to find a way to tell the story with as much balance and humanity as possible so that people don’t get swept away with angry portrayals or feel angry. If I’ve stirred those feelings of hate in anybody I would have felt like I had failed as a filmmaker.”

“As a storyteller, I try with every character, to make them as humanly 3-dimensional as possible. I want you to like everybody. That’s just me.

“Even if you don’t necessarily agree with them, you understand them, and why they’re doing what they’re doing, and I’ve done that with everything.

“Part of that is I do see everybody as the same, and every human being as the same.”

Fiona Villella is currently completing a Graduate Diploma in Communication (Journalism Innovation) you can follow her on Twitter here: @fionavillella