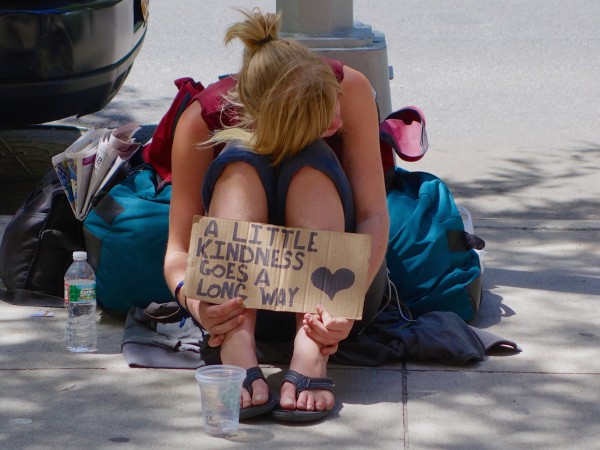 Menstruation isn’t a fun time for any woman.

But for women who can’t afford sanitary items, the struggle is almost incomprehensible.

It is estimated that there are currently 105,237 Australians living on the streets. 44 per cent of these are female.

These women are forced to decide between buying a meal or a box of tampons, as it’s rare they’re able to afford both.

They often create make-shift pads and tampons from toilet paper, rags or newspaper. Some women also resort to shoplifting.

The majority of Australian women are able to endure their monthly cycle discreetly, with an endless supply of tampons and painkillers, in the comfort of their own home.

Mothers from Brisbane, Heather and Rochelle, are trying to raise awareness about the plight of homeless women.

Their initiative, Share the Dignity, aims to provide these women with sanitary items through public donations.

There are currently 400 volunteers for the initiative in Australia, both male and female, who act as drop-off points and distributors of donations.

With over 20,000 likes on Facebook, the group uses social media to recruit volunteers and coordinate local donation points.

This month, they are aiming to accumulate over 10,000 items for donation.

Thank you to the staff and students of Figtree High School – Official in Wolongong Nsw. The school delivered lessons to…

A volunteer for the initiative and the main collector in Gippsland, Adele, tells upstart that she stores donations in her garage before distributing them to locations.

“It just sort of struck a nerve with me, it just made perfect sense to help out,” she says.

“When you are going through a hard time, especially for a homeless woman, it’s just maintaining a sense of dignity. Dealing with menstruation is inconvenient and annoying, but I couldn’t imagine having to deal with it if I was homeless.”

One of the locations Adele distributes to is Cornerstone, a refuge for the homeless in Dandenong.

Dandenong has the highest rate of homelessness in Victoria. In 2011, there were 1,634 people sleeping on the streets.

Menstruation is still considered a taboo subject in today’s society. For this reason, many people don’t often think to donate sanitary items.

“I think it was something that hadn’t really been thought about or brought into light, some generations see it as a taboo topic still,” Adele says.

Soup kitchen chef and board member at Cornerstone, Gloria, has prepared food for the homeless for nine years.

She tells upstart that Cornerstone was unable to provide women with sanitary items before people started donating.

“We just didn’t have the money for it. They had to use cotton or whatever they could find. It’s very personal. You don’t just say, ‘oh by the way I got my period today and had to use newspaper’,” she says.

The Australian state governments recently refused to remove the 10 per cent Goods and Services Tax (GST) on sanitary items.

The items are deemed luxuries and are excluded from the essential goods exemption.

Gloria says that Tony Abbott and other politicians’ dismissal of the plea is ignorant.

“Does he have a wife, does he have daughters, is toilet paper a luxury item?” she says.

“It’s great that its been brought up. We are discussing it, otherwise we don’t.”

As the message continues to spread, the volunteer base also grows. Donation bins are now available at Fernwood gyms and rural Coles supermarkets.

The volunteers are also campaigning for the attention of Oprah Winfrey, who visits Australia this December.

Please help us to get our message to Oprah or her team!We need her golden touch to help us Share the Dignity. We would…

Whether or not Oprah gets on board, Share the Dignity has pinpointed a major social issue.

Every woman, homeless or not, deserves basic health and hygiene essentials.