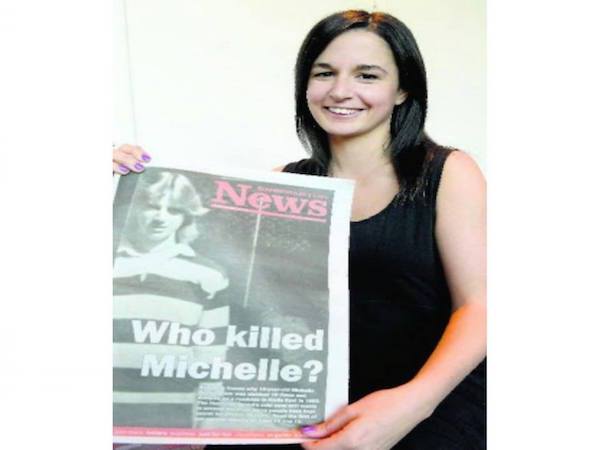 “On another note, it is a good day to be a journalist, to see what an effect we can have by doing the job we do. How special it can be.”

This is what journalist Tammy Mills wrote on Twitter last Friday, after Stephen James Bradley was found guilty of Michelle Buckingham’s murder in a Victorian Supreme Court.

Three years ago, the concept of a verdict being handed down in this case seemed unimaginable.

Buckingham’s body was found a fortnight after she disappeared in Shepparton in October 1983. She was last seen walking down one of the town’s main streets after a night out.

Since the 80s, there had been no media coverage, no new leads, and one devastated family who had been left without answers for decades.

But Mills’ series of newspaper articles in The Shepparton News in August 2012 sparked a major break in the cold case.

Norm Gribble, Bradley’s brother-in-law, had kept a secret for more than 30 years.

While packing newspapers, he saw Buckingham’s face on the front page, and decided to come forward.

Gribble told police that Bradley had come to him sobbing and with bloodied hands on the night of the murder, admitting that he and two other men had “murdered a girl”.

This secret may never have been revealed if it weren’t for the tenacity of a young journalist.

Mills was inspired to write a list of Shepparton’s unsolved murders, after reading Andrew Rule’s book, Cuckoo, that followed an unsolved murder committed by a serial rapist.

Mills tells upstart that when compiling the list, Buckingham’s case stood out.

“Michelle’s case hadn’t received any publicity since the 80s. You can’t really go past the facts of the case,” she says.

“A 16-year-old girl who went missing and wasn’t found for more than two weeks, and when she was found her body was badly decomposed and left on the side of the road. It was a horrible injustice that had been done to her.”

Initially, all Mills wanted to do was raise awareness of the cold case.

It took about six months to put the piece together.

Mills was still turning over stories for the daily paper, so the majority of her investigative work and research was done in-between stories and after hours. She says the story was always on her mind.

During this time, Mills was developing a relationship with Buckingham’s family, and particularly, her mother, Elvira.

“She’d been through so much, and who was I to bang on her door and do all these stories? When you talked to her about it, it was like it was yesterday,” Mills says.

Elvira gave Mills her blessing, but passed away just five days before the case went to court.

“I could’ve just written about it, but it was really important for me to get the family on side and to get their blessing,” Mills says.

Mills spoke to people in the community who remembered the case, obtained inquest documents from the coroner, and also contacted the homicide squad in Melbourne.

“There were a number of people in the Shepparton newsroom that were reporters and photographers back then, so they remembered it too.”

“After a lot of pestering, Ron said he and his team would look at the case again,” she says.

Former head of the homicide squad, Ron Iddles, recently praised Mills’ determination to see the story through to the end.

“They’re very thankful for the media – without a young journalist, Tammy Mills, this case would never have been solved,” Mr Iddles said.

However, Mills wasn’t overly confident that Bradley would receive a guilty verdict.

“I sat down and was preparing myself for it to be a not guilty verdict, just because you don’t want to get your hopes up,” she says.

Mills says she was blown away when the jury announced the guilty verdict.

This would never have happened without the tenacious detectives involved, in particular, Ron Iddles, whose care knows no bounds

And without the big hearted Elvira Buckingham, who placed so much trust in me despite all that she had been through… — Tammy Mills (@TammyMills1) October 9, 2015

“It was a very bittersweet day, but her family take comfort knowing she’s with Michelle.”

Although Mills has achieved a lot in her short career, this case will be one to remember.

“I don’t know if I’d ever have an experience like this in my career again. It’s just pretty extraordinary.”

Two other men have also been implicated in Buckingham’s murder, so Mills feels she’s ready to let the case go.

There were others involved that have not answered to their crime. But yet again maybe the seemingly impossible will happen?

“All it takes is one person to come forward and give some vital information. You can never really say never.”

Through Mills’ dedicated orchestration of newspaper articles in 2012, justice was finally served.