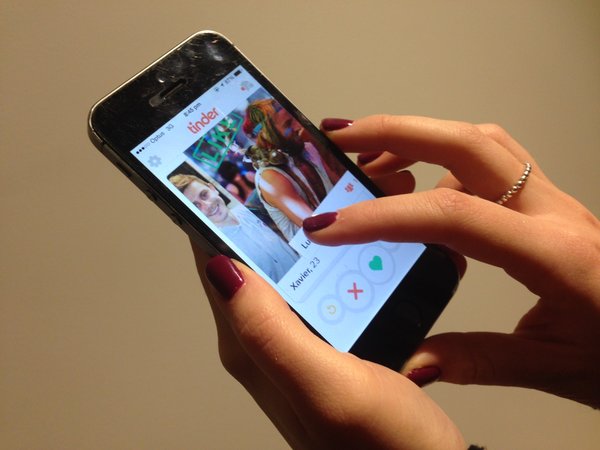 Tinder is fast becoming one of our most used social media apps, with close to 50 million active users.

The app was once typically used for flings and hook-ups but is now being taken more seriously as a credible dating site.

On average, users log into the app 11 times a day and spend a total of 90 minutes looking for and talking to potential partners.

For those who aren’t familiar with the app, Tinder is a dating service that allows users to browse through photos of singles within the age range and distance radius they have elected.

You can swipe right on the profiles of people you are interested in and swipe left on the profiles you’re not. If the person you swiped right also swipes you right, your profiles will match and you’re then able to message each other.

You can upload a maximum of six photos to your Tinder profile along with a brief bio, so users are required to make judgment mainly on physical appearance. This is how Tinder got its reputation as a hook-up app.

But times are changing and so are perceptions of Tinder. People are becoming more open to the possibility of finding someone compatible on the app.

Tinder recently uploaded a photo to its social media pages celebrating a couple who got married after meeting on the app.

“We matched on Tinder last November when I had been on the app less than 24 hours and knew right away that this was it. We got engaged in July and married last Saturday! My birthday was the next day… Best birthday present ever!” Congrats @laurenturnham & @aturnham! 👏🏻👏🏻🎉💃🏻 #SwipedRight 💚

And they’re not alone.

Charlie Barry met his current girlfriend on Tinder. The 21-year-old tells upstart that he typically used the app to find someone to hook-up with and never imagined something serious would come of it.

“Tinder has done me a world of good, I never expected what I got and am still thankful for what it’s given me to this day,” he says.

“It’s been over one and a half years and there’s no end in sight. I couldn’t be happier.”

Georgia*, who is 19 years old, signed up to Tinder with a friend to get over her last partner. She ended up finding a boyfriend on the app.

“I used the app to have a laugh and the occasional decent conversation with a guy,” she tells upstart. “Most guys you talk to are idiots, but sometimes someone can surprise you and that’s what happened this time.”

Despite this increasing positivity, a lot of people are often too embarrassed to admit to friends and family that they found love on Tinder.

“I was hesitant to tell people because everyone that knows about Tinder knows its predominant use is for a random fling,” Barry says. “I felt like people might judge us and treat us as if we couldn’t find a partner anywhere else, almost like they’d find us sad.”

Liam* also met his current girlfriend on Tinder. Telling friends wasn’t an issue for the 20-year-old but he’s worried his family will be less accepting.

Sue Yorston, a manager at Relationships Australia Victoria, tells upstart that it is a natural progression for Tinder to become more normalised as people explore more dating options.

“Young adults have grown up with instant access to information over the internet. This is a phenomenon unique to this generation and it has changed the way young people run their lives,” she says.

Yorston says that relationships initiated through dating apps have as much chance of succeeding as any other way of meeting people.

“It is important to remember it’s what happens after meeting someone that is vital,” she says. “People will present themselves in the best possible light online, they will hide what they consider to be less favourable aspects of their life or personality.”

Richie*, who is 21 years old, tells upstart that he predominantly uses Tinder and other dating apps such as Grindr and Hornet to hook-up with other men, but is open-minded about one day finding love on the sites.

“I use these apps when I’m trying to kill time,” he says. “I usually send a message to someone I’m newly matched with to get a conversation started.”

Richie says that these apps are beneficial for gay men because it’s easier to discover who is gay and who isn’t.

“I think it’s different for gay men because you can’t just approach anybody you think is attractive in real life because you don’t know if they’re gay or straight, no matter how good your gaydar is,” he says.

“People think meeting up with people you hardly know for the sole purpose of sex is immoral, or dirty, or even dangerous,” he says. “It’s just a thrill in the midst of your day and afterwards you can carry on your day as normal.”

Tinder’s accessibility, diversity and simplicity means that anyone can use it for any purpose – whether you are looking for a one-night stand or your future life partner.

*Names have been altered for anonymity.