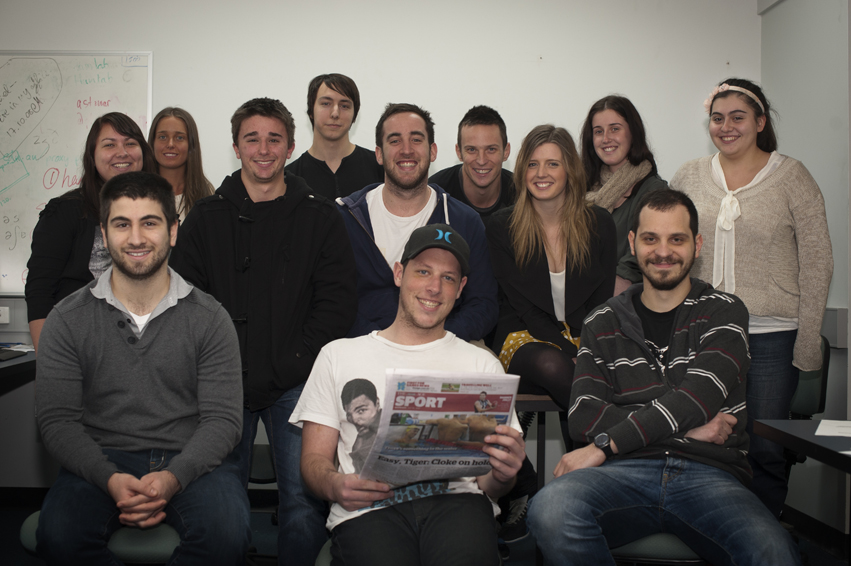 It’s goodbye to our outgoing winter editors, Justine Costigan and Emil Jeyaratnam, who depart leaving this publication in a better form than what they found it.  We thank them for their tireless efforts.

And yet such is the expectation of each upstart editorial team, who run this website for 13 weeks as part of the subject Online Editing and Publishing, offered by La Trobe’s Journalism program.

Here’s the new editorial team for the next three months.  Feel free to pitch them a story idea by e-mailing contact@upstart.net.au.

Laura is completing her final year of a Bachelor of Journalism at La Trobe University. She likes writing about travel, pop culture and social justice. In her spare time she can be found spending far too much time and money on her four-legged friends (horses).  She’s looking forward to finishing her degree and going out to face the big wide world.  You can follow her on Twitter: @laurajanehurley

Tim is a Master of Global Communications student. He has a keen interest in politics as well as all things geeky. He hopes to one day work as a political journalist, although the drudgery of Australian politics may end up changing that. You can follow him on Twitter: @TimViney2.

Josh is in his third-year of a Bachelor of Media Studies. A sport enthusiast, he spends most of his time talking all things AFL and can be regularly heard sharing his dislike for Liverpool and its supporters. If it’s not sport he is rambling about, then he will talk about his love for travel and his hopes to finish seeing the world before full-time work. You can follow him on Twitter: @jeansjoshua.

Paul is a third-year Bachelor of Media Studies student.  Paul has a strong passion for sport, particularly AFL and soccer. He loves the Collingwood Magpies and is a keen follower of Liverpool in the English Premier League and the Australian Socceroos. Paul also participates in cricket and basketball.  You can follow him on Twitter: @paulbastin10

Christina is studying a Graduate Diploma in Journalism. From writing short stories about silly sausages to poems and non-fiction pieces in her early childhood years, she has always been drawn to sharing ideas and information with others through words. With a keen interest in fashion and travel, she hopes to gain new skills throughout her studies to find a career in one of these fields. You can follow her on Twitter: @cmlovrecz

A passion for art, sport and creative writing has led Dan through the doors of La Trobe and Monash University, where he completed a Bachelor of Arts with Honours, majoring in Drama and English. An equal passion for food and bartending have funded (and continue to fund) these tertiary journeys. Pop culture, sport, theatre and the search for the world’s best coffee are all part of his waking life.  Dan is a Master of Global Communications Student, a total Hockey tragic and makes a snappy Martini.  You can follow him on Twitter: @dan_tooms

Toli is a third-year Bachelor of Media Studies student and is aspiring to become a film critic. He has completed a media internship with Empire Magazine where his work has been published. He also runs a weekly blog called The Pap Rant which covers contemporary issues and cinema. His interests include watching films and derisively pointing out their shortcomings. Toli’s dream is to work for a major magazine overseas, perhaps in London.  You can follow him on Twitter: @paprant

Vivien is currently studying her Master in Global Communications. With an undergraduate degree in International Relations, her interests lie in international politics, Australian foreign policy and international crisis and development. She is also interested in travelling and exploring the world and Australia and hopes to continue her career by combining as many of her interests as possible. Vivien is currently working part-time at AHPRA and volunteering occasionally at the Mornington Peninsula News Group. You can follow her on Twitter: @viviendurant

Chani is a third-year Bachelor of Journalism student looking forward to stepping out into the real world next year – and hopefully getting a job. When she isn’t working hard at uni, she’s probably carting her three younger brothers to and from school, cooking, cleaning, working retail or trying to add to her writing portfolio.  You can follow her on Twitter: @chaniunger

Sam McMeekin is a final-year Bachelor of Journalism student whose interests lie is fashion, music and all things pop culture.  She loves to have a whinge, and enjoys a bit of controversy from time to time.  You can read more of Sam’s work on her blog, and follow her on Twitter: @sammcmeeks.

Ody Kripotos is a Master of Global Communications student. He was born in Melbourne but raised in Athens, where he has worked as a journalist, in various media. He currently participates in the Greek language program of the Melbourne community radio station 3zzz.  You can follow him on Twitter: @noseriousreasons

Damien is a final-year Bachelor of Journalism student, aspiring to be a sports journalist. In 2010, he started work with Leader Newspapers as a sports scribe, before taking on casual reporting duties. His proudest piece was his first front-page story for the Melbourne Leader in December 2010. He has also been a long-time volunteer at SEN radio. You can follow him on Twitter: @damienractliffe