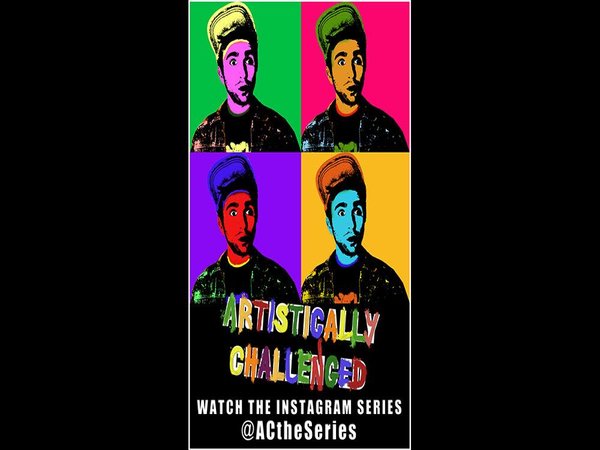 Inspired by the elements of what makes art ‘successful’, the quick, witty and visually stimulating web-series challenges the concept of time and content.

Artistically challenged has developed a new way of web storytelling, which combines short clips to make one 15-second, dialogue free episode, to illustrate their story of Nick, a young artist living in New York City, who finds that a small lie, which makes him an overnight celebrity, comes with a large price tag.

It’s not over for these web-series gurus, with Season Two already in the works, the series is going multi-platform we can’t wait to see how it turns out.

Your use of Instagram as a web series platform is new and unique. How was this idea conceived and did you know right away that it could work or did you have doubts in the beginning?
Jeremy Boros: The idea really started when Mike and I took a trip to the MoMa a few years back. There was an exhibition of a particular artist whose work caught our attention. Essentially, it was GI Joes, shells, and Christmas lights glued onto pizza boxes. It really gave us a chuckle, but it got us wondering what makes art “successful.” Why does certain art attain the prestige of the MoMa while others never transcend a street corner? That exploration of subjectivity, luck, culture and talent was intriguing to us as well as the colorful characters inherent in the art world.

Michael Delmara: We also wanted to try something that had never been done before. From the start, we knew it would be a challenge to tell a story in 15 second increments, but that limitation actually turned out to be one of the best and most liberating aspects of the process. We had no idea if it would actually work, so we kept it in the mindset of a fun experiment. That freedom made the process a blast for everyone involved.

How much of the original footage is cut out from the final product?
Michael: We shot a lot of stuff, but we were also very deliberate about the process. We storyboarded every single shot, so even if we did numerous takes, we were paying close attention to what would actually fit in time-wise. However, you can never predict just how short 15 seconds really is until you’re editing the episodes together!

As a content creator, where do you go to find information about other film makers and web series?
Aleks Arcabascio: I find most of my new favourite artists while scrolling through Facebook, Instagram and Twitter, and seeing what my friends are posting.  Some of it’s stuff they made and some of it’s just something they found so cool they had to share it.  UCBComedy, IFC Comedy Crib, College Humor and plenty of Youtube channels can be reliable sources of strange new entertainment. I’m constantly reading Tubefilter, Indiewire, Splitsider and other sites to see what fun ways people are exploring online filmmaking.

Michael: I browse all the usual sites (IMDb, Ain’t It Cool, Joblo, /Film, etc) and also try to follow the people whose work I like on social media. A lot of artists will post cool stuff that is more personal than average news.

Jeremy: I get all my news from my friends Aleks and Michael.

Is your series an ongoing project? If so can you give us some clues about what comes next?
Michael: Absolutely! We’ve gotten tremendously positive feedback, so we’re writing the second season currently. Having learned from season one, we’ve already added a lot of new elements that will make it even more exciting and unique.  Maybe Nick’s adventures will span across several platforms this time…

When are you completely satisfied with your work?
Aleks: It’s hard to ever be completely satisfied, but at some point you’ve shaped and reshaped your material into the best that “it” can be. Then you share it, let it live in the world and keep making more and getting better.

Michael: I’m usually satisfied with my work when I feel like I’ve been able to tell the story I originally set out to tell. That being said, I go back to old projects all the time to see what I could have done differently. I think I’d be worried if I looked back and thought all my old stuff was perfect.

Jeremy: I agree with them. I’m rarely satisfied, but being in the arts, that’s sort of what you signed up for. As an actor especially, you get pretty used to rejection. You’ve just got to take risks, develop a zest for failure, and keep on truckin’. “Fail again. Fail better,” says Beckett.

In what ways do you utilize social media to further your brand?
Michael: The series was conceived to be shown exclusively on Instagram, so it’s very cool to engage with fans directly. It’s not like you can go to every single theatre showing your feature film and ask people what they thought. In our case, if people want to comment or engage with the project, it’s easy since they’re already on our social media account.

Jeremy: And we didn’t want to do a Facebook page or overuse Twitter or other social media. We wanted everyone to be directed to the Instagram exclusively for the content, and then our website for more behind-the-scenes stuff. But as Michael mentioned, this time around, we have some awesome ideas on how to bridge multiple platforms to tell season two. It’s going to be a blast.

Can you describe the ultimate fan of your series?
Michael: Anyone who would be willing to wear a Jerm t-shirt.

Aleks: In all seriousness, we’re humbled that some of our biggest fans live thousands of miles away across the country and across the globe. That’s the beauty of web content. Many of these people don’t know our past work, don’t know us and sometimes don’t even speak English as a first language. Yet, they find our show on Instagram or through a review, give it a watch, and share the discovery with their friends.

What was the most difficult challenge you had to overcome in production, and how did you go about it?
Michael: How do you tell a complete story in just fifteen seconds? We wanted every episode to feel complete, so it took a lot of writing and specificity to get to a place where we felt it all worked.

Jeremy: I think the hardest thing was finding the moments and the flow of the comedy so that each individual episode could be stand alone funny, while also moving the story along in a dramatic sense. It’s hard to create tension in such a short amount of time without it feeling melodramatic or empty. Even though we wanted laughs, it needed to be grounded in some sort of dramatic reality that made people care enough to watch another episode. In terms of the acting, it was tricky to find that balance. You have virtually no time (and no dialogue) to “warm up” into it, so you’ve just got to find that truth, comedy, and commitment right NOW.

From start to finish, how long did it take to complete this project?
Aleks: We wrote a large-scale series for a low-budget project and had lots of characters and locations that we needed to secure. So, we were heavy on the pre-production side, but the shoot was only two weeks.

Michael: It took us about 8 months from the day we hatched the initial idea to the final cut.

Jeremy you have worked in several different capacities in both stage and film productions over the last few years. If you had to pick one particular role you would like to see flourish what would that be?
Jeremy: At the present moment, I have an indie film, a documentary, and a nature show that I’m working on. My wish would be to see those projects flourish so I could keep exploring new things. Novelty excites me as opposed to continuing with characters or stories I’ve already spent time with. Honesty though, I’ll take anything that gets me to Australia again! I was there when I was 18, and you know when they say, “your soul belongs somewhere?” Well, that’s what Australia felt like to me. Like going home.

Artistically Challenged on the web: