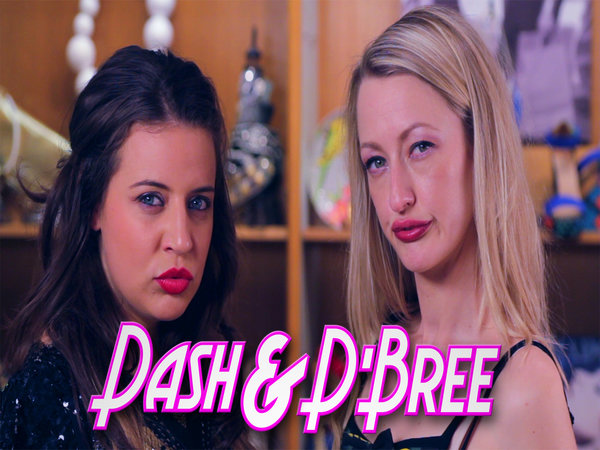 Hey! If you’ve worked in retail for as long as they have, getting $17.60 an hour to wipe bum marks off fitting room mirrors, you would be dreaming of something bigger too. Right?

Created by Hayley Butcher and Katrina Mroz, this comedy web series follows these retail girls, plotting their next moves and practicing their audition for The Voice.

It’s true what they say: life totally gets in the way when you’re trying to make it. They may have disappeared after Australia’s Got Talent but they’re ready to make their dreams happen, for real this time, no matter what gets in their way!

What (and/or who) inspired your series?
Um, this might sound really up ourselves, but we inspired our own series … (hair flip). People think that when you appear on National TV that your life changes for the better and everything works out and you get a TV show and Dannii comes round for dinner. IT DOESN’T WORK OUT THAT WAY! We were inspired to tell the true story of what happens went you don’t get actually famous, it’s our real story with our everyday struggles.

What do you want audiences to take away from your series?
Two new best friends! New best friends who they need to hang out with on social media every day and two new party buddies they need to see in real life at our live show (shameless plug).

How do you find inspiration for each episode?
Well, we started off by looking at what was going on in our lives at the time, for D’Bree she was struggling with her super traditional family and Dash was having a hard time communicating with the opposite sex. We also thought it was important to throw some fashion philosophy and then boom before you know we’re serving music producer and on the verge of our big break again…

What kind of preparation goes into each episode?
Oh god, we’ve just broken out into a cold sweat remembering everything again… because we were a team of three (across everything from writing, performing, producing, directing, lighting, sound, location hunting, casting, hair/make up, costume, editing, visual effects, music…) we did everything ourselves and made the series without a crew… It was a labour of love. We could go into more detail about that but, we are now rocking back and forth in a corner.

Please tell us a quirky and/or interesting fact about yourself or team that’s unrelated to your web series?
Hayley and Kat first bonded over their ability to quote Strictly Ballroom, word for word. Hayley and Josh (who are partners in real life) discovered they were pregnant after the first week of shooting the series; their son Angus is obsessed with his Tikky Tat (Auntie Kat).

Can you give us some clues about what comes next?
A modelling career… And we are currently preparing a new live show, check out Dash and D’Bree DEMO for Melbourne Fringe. We are also plotting Series 2 and working out our pick game to entice the Bondi Hipsters into “co-pro” (co-production).

Can we expect to see a follow up to the Clap Rap?
Yeah babes, this summer we’re gonna start a dance craze called the HIV hoedown! And, you can see us live, where the only thing you’ll catch is a catchy tune.

Describe the ultimate fan of your series?
We have an amazing fan – her name is Heidi. She lives in Queensland, has a horse and is the loyal and never-ending liker on Facebook. If she had a huge online network she could share the series out to, a relaxation retreat in Bali and a stretch hummer, she would be the Ultimate Fan.

What was the most difficult challenge you had to overcome in production, and how did you go about it?
There were so many challenges with a three person crew, when two of the crew were in front of the camera. When we were shooting the reuniting scene in Fitzroy Gardens (Ep 8), it was so windy and hard and awful, and Hayley was pregnant and the reflector board was flying away and Josh was trying to hold the boom and frame the shot and… and… we just kept going and gave each other bum rubs (try it, it’s so relaxing) and then once it was done we all enjoyed a laugh and massive carb fest.