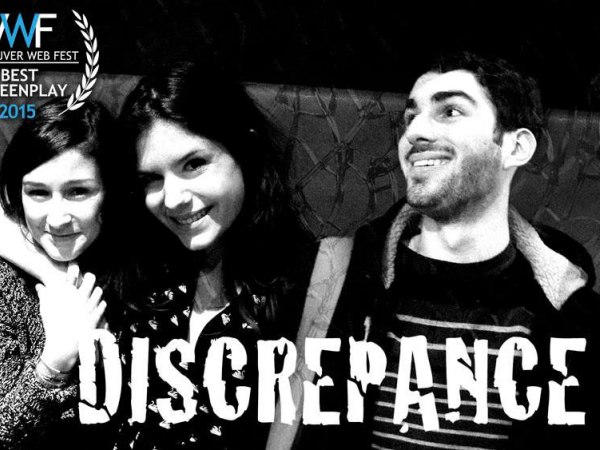 Each episode of the French drama uncovers a new twist as the plot unfolds and we immerse ourselves deeper into the goings on of the characters lives and the sinister mystery surrounding them.

What do you want audiences to take away from your series?
I guess I hope people will ask themselves what they would have done in the characters’ places. What choice they would have made. Given the circumstance, it’s very hard to say who is right and who is wrong. There are different points of view and all of them make sense.

What was the biggest challenge you had to overcome making this series?
Honestly, it wasn’t the shooting or the editing but the pre-production. It was finding every member of the crew on time with a very limited budget. Sometimes, two days before shooting, I found myself without a boom operator. Finding good technicians willing to work for almost nothing was probably the biggest challenge. Planning is the worst. People are unavailable, you have to make changes. They are not paid or not well at all, so you can’t blame them for not having time for you. It’s a really tricky situation. I had to rewrite certain storylines as my actors became unavailable. Also, the character of Hélène is less present in the second half of the season, because, behind the scenes, we had what you could call a “friendship break up” and it was difficult at the time to work together again.

What (and/or who) inspired your series?
I was 21 when I started this series. I witnessed how a loving friendship can become a heavy burden, especially at this age when friendship, and being part of a group, shape who you are and how you see yourself. I put a lot of thought in this show. A lot of sadness too. This series is about four people who love each other and can’t help but hurt each other.

Camille, you play the part of Thibault in the series, do you relate to him in any way? Is there a part of yourself in his character?
I believe there is a lot of me in Thibault, but probably when I was 17 or 18. At the beginning, he’s a character who can’t make decisions for himself and is often witnessing other people’s choices without getting involved. That’s something the character of Hélène, Thibault’s girlfriend, can’t stand in Episode 2. During the six episodes, Thibault is hit, hurt, and crushed. When life strikes him, he becomes dark, he stops being a child. That’s something that I went through myself, during the two years we shot Discrépance. Sometimes, I used my own sadness and my own darkness to play Thibault.

How long have you been making web series for?
Discrépance was my first web series and it started in 2011.

Are there any web series, other than your own that inspire you?
At Vancouver Web Fest, I discovered Nasty Habits, which is a beautiful web series that I found myself very close to, in terms of characters development. I also love what L.A. Macabre is doing in terms of suspense and I witnessed the efficiency of a really good cliff-hanger. I love cliff-hangers.

This series almost seems like a movie, why did you choose a web series format instead?
A movie must stay the same during its run. It has one identity. You can’t have a nice little vacation with a bit of drama at the beginning and a ruthless serial killer at the end. With a web series, I could change styles as I wanted to, reinvent the identity of the show at every episode. Plus, you know, you can’t really make any cliff-hangers in a movie because the audience has the next scene right away. If I put together every episode to make a movie, the rhythm would be really strange.

From start to finish, how long did it take to complete this project?
I wrote the first episode in august 2011. I posted the last episode December 31st 2013.

What’s special or different about your series?
It’s slow. It demands that you take your time, sit there with us, and let us tell our story. It’s not some quick funny jokes and then you’re done. It takes time. You have to look at the characters and, slowly, see how they self-destroyed each other. I think the moment where you get it is in Episode 5, when Hélène’s mother strongly judges them. I realize it sounds a bit pretentious but it’s really a big picture that you can’t see unless you watch the all series. Hopefully, it’s worth your time.