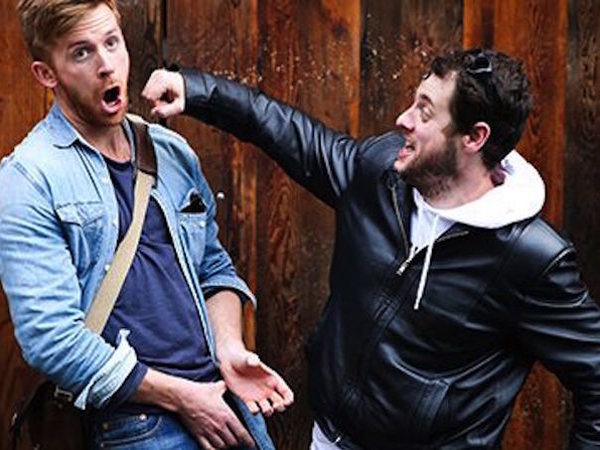 Idiot Box, created by Benjamin Bryan and Caitlin Bryan, follows the adventures of two childhood friends and their struggle to come to terms with adulthood and life in general. Benjamin and Caitlin are new comers to the webseries scene, having been creating content for only five months.

What is your favourite thing about making web series?

The flexibility of the format, particularly for a genre like comedy, is a huge advantage. It can be hard to make spontaneity fit into a timeslot. Also the direct engagement that you get with your viewers provides great feedback about what you’re doing right/wrong.

What sort of process do you go through when brainstorming your next episode?

I generally write down my ideas as one liners when they come, which can be whenever really eg. Tania gets a Mexican abortion. It’s more of a memento I guess. Then later when I feel like I have enough to work with I’ll sit down and expand on those ideas, see how far I can take them.

At the moment Idiot Box is entirely self-funded.

What’s special or different about your series?

I think that Idiot Box features some pretty special characters. I haven’t seen any other series featuring a Tooheys Red Bitter Drinking Mystic who turns out to be a small time thief.

Most of your episodes are under a minute long, can you tell us about the difficulties with creating a series like this?

It’s actually a real advantage of our show. You could put almost anything on the internet and if it’s under five seconds people will accidently watch the whole thing. We would love to make longer episodes; unfortunately we often shoot 3-4 episodes a day so we just can’t make that much screen time.

Your series is an ongoing project. Can you give us some clues about what comes next?

Yes. We’ve just released a pozible campaign video that features a few teasers from our pilot episode (which still hasn’t been released yet). There’s a fair bit of mayhem that takes place so definitely something to look forward to!

What was the most difficult challenge you had to overcome in production, and how did you go about it?

On one of our shoots we were in a park that happened to be next to a learner driver centre. It was such a peaceful place on the recce, very quiet, nobody around. On the day there was a classic car time-trial race with all these lead-footed grandpas doing burnouts every 30 seconds or so. We had to wait in between races to shoot and our dialogue went for about 25 seconds. It was tough.

What do you want audiences to take away from your series?

How do the French say it? The joy of life..? Something like that.

Idiot Box on the web: