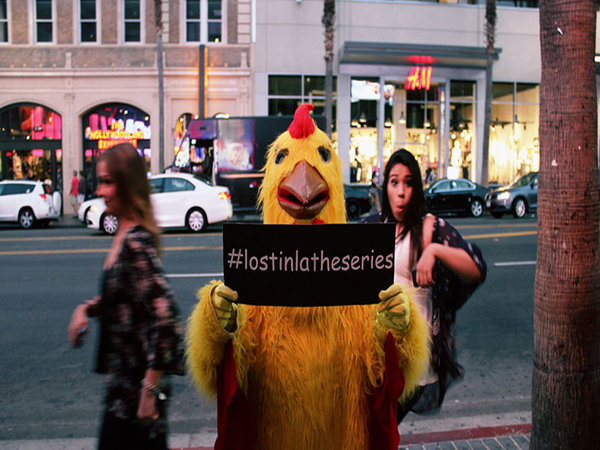 Lost in L.A chronicles the life of Candace Benson, a hilarious, sarcastic, intelligent but ditzy actress, making her way through the whirl wind which is Los Angeles. She’s broke, out of work, and desperately looking for that big break in her career. A chance to live the Hollywood dream.

Coming up to its fourth season, the series evolves in all aspects, from Candace’s relationships and professional life to the length of each episode.

How much do you relate to the character Candace? Are some aspects of her personality drawn from your own or someone you know?
I absolutely relate to Candace! Candace is based on certain aspects of my own personality! Plus a combination of ‘real people observations’ including homeless people and superhero costumed characters along Hollywood Blvd in Los Angeles.

As a content creator, where do you go to find information about other film makers and web series?
Firstly, I started with google and searched for web series blogs or forums then I found twitter to be an excellent place to approach other web series creators. I followed a lot of web series that I liked on all social media platforms and learnt about entering web series festivals. Now, I like to keep an eye out on my facebook news feed and I like to sign up to newsletters on other film makers’ sites and subscribe to their channels.

How do you finance your series?
I keep all levels of my production low key, therefore there aren’t too many expenses to cover. The big expenses where people might find they spend a lot of money, I actually do myself (post production/editing and marketing). But, what separates my series from a lot out there, is that it relies heavily on script and the chemistry between the characters/actors. Lost in LA has always been a dialogue driven concept right from the beginning – therefore what is important is the acting and directing process.

In what ways do you utilise social media to further your brand?
Announcements and updates are always uploaded to youtube, facebook, twitter and instagram. It is also a great way to hear feedback from fans and to personally engage with people.

What is your favourite thing about making web series?
Creative control for sure. It feels so wonderful to create something from scratch that is your own vision and then being able to decide on your own who you would like to collaborate with.

Have you achieved the goals you set for this series?
Not quite yet.. The show is growing so much, Indieflix have just picked it up and there are still many more episodes to edit and release! Series 4 is right around the corner.

From start to finish, how long did it take to complete this project?
I started around July 2013 – Ever since then I have been releasing episodes – there are currently 30 episodes on the web.

So we’ve seen your comedic side in ‘Lost In L.A’ and we know that you are very talented in several forms of martial arts. If you had to put those skills to use in new media what would a project like that look like?
Ha ha! It will look like a female comical version of a Jackie Chan movie.

Please tell us a quirky and/or interesting fact about yourself or team that’s unrelated to your web series?
I like pandas and unicorns.