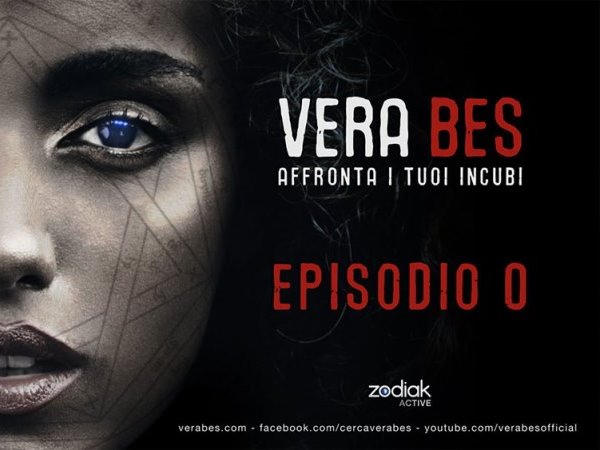 Created by Francesco Mazza and Riccardo Milanesi, Vera Bes is an Italian web series centred on dreams, the subconscious and tattoos. With the help of the belladonna berries, Vera Bes can enter your subconscious where your dreams come to life.

Francesco, what was it about your short film “Mat-Eaters” that drove Matteo Scortegagna to hire you as director for Vera Bes?
My short film “Man-eaters” was a story about a group of fancy New York girls who find out that eating the flesh of cheating husband gives the eater a sort of magical power. For this reason, they intentionally start to be cheated on in order to kill their husbands and eat them. The concept was pretty original and unusual for Italian standards. I think with Vera Bes, Matteo wanted to do something different and that’s why he hired me.

From start to finish, how long did it take to complete this project?
It took one year. But the project is still in the making, we are still looking for and discussing with broadcasters for producing a TV series based on the concept.

What was the most difficult challenge you had to overcome in production, and how did you go about it?
Basically, the production was Italian and I live in New York. That didn’t really help the pre-production. Plus, web series have been around for years; nonetheless it’s still a dark, obscure territory. Everything was about learning by doing. But I’m still pretty satisfied with the result.

How do you finance your series?
Production was entirely covered by ZodiakActive.

Why is there a correlation between tattoos and dreams? What inspired this idea?
The idea is simple: when you want to get a tattoo, that’s your subconscious talking to you. Something deep inside you has just happened and the desire of having a tattoo sort of makes up for it. Eventually, when Vera gets into your world of dream, she’s able to see what actually happened and finds the correlation between that event and the tattoo you’ve got.

The idea comes from Jung and his theory of the subconscious being “responsible for everything”.

How many people worked on this project?
A lot,  I guess 30 at least.

Have you achieved the goals you set for this series?
The goal is to have the series produced by a network and it’s still in the making. I do believe that the concept is fresh and powerful, it can totally make a great TV show.

What is your favourite thing about making webseries?
I’m not a webseries enthusiast. In my country zero webseries proved to be financially valuable, and even in the U.S., where I live, the only web series that properly made it is High Maintenance, which is awesome but it isn’t really made by two amateurs. The idea of web series as a golden opportunity for filmmakers to “make it” has to go through a severe review.

Plus, while if you make a terrific short film there are plenty of good festivals out there where you can have the proper exposition, webseries festivals are very very tricky. Sure thing you have Marseille, Rome, Melbourne, Vancouver which are the places where you want your web series to be showed, but there are plenty of other festivals that are flat-out scams. And in my opinion, when a scam takes advantage of the passion, the talent (and the money) of dreamer – because an independent filmmaker is essentially a dreamer – it’s a shame.

Are there any web series, other than your own that inspire you?
As I said, High Maintenance is one of the best shows of the last 5 years. I’ve rarely seen better acting, and the writing is so witty and natural it doesn’t even seem to be fictional.

For Vera Bes, my reference was American Horror Story, but here we are: an episode of AHS costs 65 times more than one of Vera Bes.

Describe the ultimate fan of your series?
Great question, great problem. My series is on YouTube, and according to the data I have, my web series has been watched by 13-15 year old kids (70% of the total) on their smart-phone ( a stunning 82% of the total).

I do not think this is the best audience for a show that constantly refers to Jung, Dostoyevsky and Alfred Hitchcock neither I think that on a smart phone you can enjoy something shot in 4k with cinematic effects.

But here we go back to the webseries problems. Is YouTube a good medium for webseries? I doubt it. So what’s the medium? I have no idea.